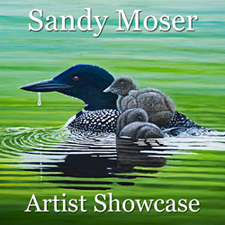 Light Space & Time Online Art Gallery is pleased to announce that the Canadian artist, Sandy Moser is the gallery’s newest featured artist. Sandy Moser is a life-long resident of Nova Scotia and she has always been interested in painting and drawing nature and animals. Sandy attended Nova Scotia Teachers College instead of Art College and that lead her to a twenty year career as an English and art teacher in junior and senior high schools in Sheet Harbour, Nova Scotia.

Sandy is a self-taught artist, but she has taken many workshops in the past 15 years. She has taken watercolor workshops from world renowned painters Zoltan Szabo and Cheng- Khee Chee. In addition, Sandy studied wildlife art through a twelve month course from North Light Art School. She was also very fortunate to have studied with landscape artists Tom Forrestal and Peter Gough, along with the silk painter Holly Carr. Sandy has attended many workshops in watercolors, egg tempera and acrylics. Sandy has also studied wildlife art from Lloyd Pretty, Ron Decker and Derek Wicks. Her recent realistic paintings of wildlife are painted in acrylics with many glazes, but she also paints animals in gouache, pastels, scratchboard, and watercolor, as well as sketching in graphite and ink.

Sandy's first solo exhibit was featured in the Learning Resource Center Gallery (LRCG), at the Nova Scotia Teachers College, Truro, in January 1995 and her second solo exhibit was also held at the LRCG in 1998. In November 1995, Sandy was featured on the television program "Tales of the Eastern Shore", which appeared on a local Dartmouth cable station. Two of her paintings of the Eastern Shore are in the collection at Province House in Halifax. In 2001, Sandy won first prize in the “Art in Bloom” exhibition in Truro, N.S. Since then, she has won numerous awards and has been featured in various newspapers and publications.

Sandy’s work has been featured in many selected solo and group shows within the province and in many galleries throughout the United States. She is currently a member and founding president of the Seacoast Trail Arts Association and is a member of Visual Arts of Nova Scotia. Sandy’s paintings are now in private collections in many parts of Canada, the United States, and Europe.

The beauty of Nova Scotia and Atlantic Canada has been the inspiration for many of her seascapes, landscapes and wildlife paintings. Since living along the Eastern Shore of Nova Scotia, Sandy has had the opportunity to study and photograph many species of birds, in particular the common loon. She and husband Robert, photograph loons from their canoe. She says, “It is just awesome to be able to paddle alongside a mother loon and watch her feed her babies and teach them how to dive. These are the things I want to capture in a painting, a moment in time; a gaze of an eye, a particular stance, or a realistic look of an animal or bird.”

Sandy further states, “Painting is entirely for my pleasure and fulfillment. I am driven to create images on canvas and paper. It is something that I cannot stop. It is like breathing – it is a required part of my existence. It’s who I am and it’s part of my soul. To be able to create a story, an action, an image, is a wonderful passion to have. When the brush goes into my hand, something takes over and I am lost in the creative process. I believe it is a gift from God. I want the viewer to be able to appreciate the beauty of these creatures and perhaps they will understand how important it is that each of us must do our part to try to preserve the environment for their habitat. Each individual has a responsibility to co-exist on this planet in a way that respects and protects wildlife and their surroundings”.