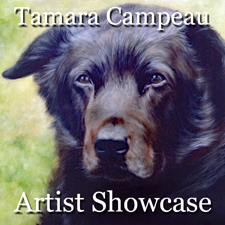 Light Space & Time Online Art Gallery is very pleased to announce that Canadian wildlife artist Tamara Campeau is the gallery’s newest featured artist.  Tamara will now be featured and be widely promoted by the gallery.

Tamara Campeau was originally born in the sunshine state of Florida. Not too long after she immigrated to Quebec, Canada with her mother. What Tamara loved most in life was animals and art.  Till this day, these two loves are still very present in her life.

Tamara attained a technical degree in Illustration & Design in 2008. Where then her eyes were introduced to a whole other world of visual art.  During her studies, at this point and time, she was doing many different projects with many different media’s, an experimental phase in her artistic journey. It was sometimes pleasant and sometimes not.  During and following her college studies Tamara would do commissioned paintings which consisted mostly of dogs, cats and portraiture of people.  In terms, of personal work, Tamara enjoys depicting nature’s greatest creation, wildlife. In general she is very observant of everyday life where then she tries to incorporate this in her work.

She has been painting for 10 years, at first in acrylic, but she has now been painting primarily in oil for the past seven years. When bringing life to her creations she emphasizes detail and textures to draw on the emotions of her audience through the eyes of her subjects. Tamara considers herself to be a self-taught painter because throughout her studies, painting was not really taught to the students and even then it was only in acrylic.  When it came to the last year event show for the students to display their work over a three year span, much of Tamara’ s work consisted of her personal painting work versus her academic projects, teachers enjoyed but were surprised to see what her work mainly consisted of.

Currently, Tamara is studying to attain her bachelor degree in Illustration.  She hopes one day to become a full-time freelance illustrator and wildlife painter. As an illustrator Tamara wants to undertake the industry of children books by portraying her long love of animals in her work similar to her paintings.