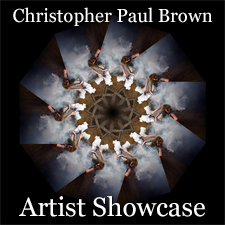 Light Space & Time Online Art Gallery is extremely pleased to announce that Christopher Paul Brown has been named as the Gallery’s new featured artist and he will now be promoted by the gallery for the next 14 days in the gallery’s Artist Showcase.

Christopher is an award-winning artist based in North Carolina, USA. Christopher was selected as 1 of the top twelve finalists in the gallery’s 13th Solo Art Exhibition Series. The placement in this competition qualified his art to be showcased in this feature.

Christopher’s Artist Showcase feature will be promoted to over 350+ major news outlets, with inclusion on Google News & Bing News. In addition, the gallery will also be featuring and promoting his artwork in the gallery’s various social media networks for further exposure.

Below are Christopher’s Artist Biography, Artist Statement and 5 images that were submitted to this competition.

In 1980 Christopher Paul Brown received a BA in Film from Columbia College in Chicago. Nevertheless, he considers himself a self-taught musician, photographer and videographer. This is largely due to his unorthodox approach to art in all its forms. He views art as a matter of alchemy and uses improvisation coupled with straddling the polar opposites of intent and openness. The outcome is in part unconscious and is highly dependent on serendipity and synchronicity. Brown’s views on art and his unusual means of creation are the result of LSD trips in the early to mid 1970s. He brought back from those trips an awareness that we operate in more dimensions than the familiar four. It is Brown’s view that improvisation, alchemy and the straddling of polar opposites catalyzes the energies of these extra dimensions. Brown sees these extra dimensions as the frontier of our times.

During the mid-1970s he co-founded the Trusty Warins Performance Ensemble. It incorporated music, projected film and actors in a manner reminiscent of happenings in the late 1960s. In 1979 he co-founded experimental music group Random Touch. After initial marketing efforts failed they gave up marketing and live performances until 1999, though they recorded continuously. In 2003 Brown co-founded experimental music group Bosch. From 2000 to 2012 he produced and played on 17 releases that included CDs, CD/DVDs and a vinyl record. This music was played extensively on college radio stations, including MIT and UCLA, in London and Moscow, and received many strong reviews.

From 2003 to 2007 Brown created numerous experimental videos using the music of Random Touch as soundtrack. The results appeared in many of the major US film and video festivals and in 2004 the work You Define Single File was nominated for the Golden Gate Award at the 47th San Francisco International Film Festival. Brown’s initial photography efforts were well received. In 1979 he sold a work to collector Standard Oil Company of Indiana (renamed Amoco and now part of BP). Between 1979 and 1986 he participated in numerous exhibitions and published in two Chicago magazines. In 1985 he had his first solo show entitled Dubuque Revisited at Swen Parson Art Gallery at Northern Illinois University.

Brown suspended photography marketing and public shows from 1987 to 2009. In the late 1990s he moved from black and white 35mm photography to color medium format photography, and in 2013 he switched to digital color photography. Following the release of Random Touch’s last release in 2012 Brown devoted himself fully to marketing his photographs. Dozens of exhibitions followed, along with magazine and book publications and awards. In 2017 he exhibited 10 large works at the Ormond Memorial Art Museum in Ormond Beach, Florida. In 2017 and 2018 he exhibited three times in Europe: twice in Rome, Italy and once in Belgrade, Serbia. In October 2018 Brown was one of twelve artists selected to be exhibited on billboards for the 2018 Click! Billboards Exhibition: Writ Large. In 2017 his work appeared in Artwork Network’s Big Picture street art project in Denver, Colorado. In 2016 he was one of three winners of the 1st Annual Competition for Elevator Doors at the Cultural Center of Cape Cod in Yarmouth, Massachusetts. In 2018 he was a Gold Winner at the Moscow International Foto Awards for his series Fabric on the Dock.

Brown’s process includes extensive manipulation, both in-camera and in post-production with Adobe’s Photoshop. His work in the field is almost entirely with a hand-held camera, and has included a radio controlled remote flash, slow shutter speed and a narrow field of focus. In post-production he relies heavily on layers and often creates geometric mandalas, sometimes in the form of pentagons or even heptagons.

The outcome of Brown’s work is, in his own words, “…like the shards of dreams barely remembered.” He claims his photographs can tell different stories to different people and so rarely titles his work beyond creating series titles. His work appears to express the unconscious, the subterranean and the non-linear. His work does not address the mind. He is adamant that the mind is a fine servant but that modern society has deified the mind at a tremendous cost. Brown’s work addresses the soul and the heart, but through a lens that may well be from another dimension. He claims that his manipulation partially disrobes the subject of the camera. The viewer, he says, completes the process.

“Ancient metalworkers had no need to understand the molecular and sub molecular complexities of their steel, bronze, copper, gold and tin. They invented mystical powers to describe the unknown, while they continued to operate their forges and wield their hammers.” – Frank Herbert, Heretics of Dune

I, too, have no comprehension of the mechanics of my art’s manifestation. I do have a number of metaphors, and these metaphors, in relation to one another, are paradoxical. My suspicion is that paradox is at the heart of art creation/discovery.

An alchemical approach has dominated my work in the arts over these many years; I want to find something of interest beneath the surface. I have applied this approach to 2D art, video art and music art. In every case I eschew extensive planning and reliance on the mental in favor of improvisation and the straddling of polar opposites. The polarities I most frequently invoke are intent/openness and obscure/reveal. A form of alchemy develops in this straddling of polarities. Surprise, serendipity and synchronicity then make their appearance, and a glimpse of something beyond the surface of my subject is revealed when this process is successful.

One of the metaphors I find useful is that I serve as a conduit or conductor of energies beyond my ken. Just as a wire conducts electricity and a lens conducts light, these energies flow through me but I am not in charge of them or knowingly responsible for their participation. Certainly these could be unconscious energies of my own, or they may be entirely external to me. My conscious self plays a role, but it is more as collaborator than as director. This, too, is a sort of paradox of polarities in that this internal/external explanation may be akin to the wave/particle model for electrons; both may be valid.

As Niels Bohr once said: “How wonderful that we have met with a paradox. Now we have some hope of making progress.”

This series, titled Katrin with Smoke Under the Bridge, is from a fun shoot I did with model Katrin Dohse beneath an eight-lane bridge that spans the French Broad River in Asheville, NC. We shot just below the underside of the road above, atop dirt pitched at a steep 30 or 40 degrees. We shot with smoke sticks that she held in her hands. Her performance was both artistic and athletic. She was moving on a steep slope and working to be both in, and not entirely in, the smoke trailing from her hand-held sticks. The background was low-key – just dirt further up the slope and the bland metal struts of the bridge. The space was dark so I used a radio-controlled remote flash.

I was drawn to this shoot by the texture and slant of the dirt “floor,” by Katrin’s grace and athleticism, by the shunned, abandoned nature of the location, and by the use of smoke. I love smoke and was drawn to Katrin playing hide and seek with it. I took 208 photographs during this 70-minute shoot and later created 335 individual works of art. One of the things I like about the smoke is that it begins the obscure/reveal polarity before any double exposures or post-productions superimposition.

This shoot is a great example of what I call Radical Play. I have found Radical Play to be one of the easiest ways to achieve alchemy in art. The secret is to engage/straddle two polar opposites at once. My primary focus is intent/openness. I intend to create strong art and have fun in the process, and I am open to how the art will materialize. When these polarities are engaged, surprise, synchronicity and serendipity show up. Play of any sort allows an easy engagement of opposite poles. Play simply intends fun and has no interest in how it comes about. As a result, my best art comes to me as a surprise; it is as if I am discoverer rather than creator. Planning is always minimal for me. It is best to think of me as a primitive hunter-gatherer as opposed to a modern urban agrarian. Every venture is a metaphorical jump off the cliff.