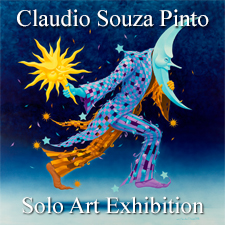 Light Space & Time Online Art Gallery is very pleased to announce that Claudio Souza Pinto has been selected as one of the four artists of the gallery’s recent 12th “Solo Art Series” Art Competition.  Claudio will now have a month-long solo art exhibition and he will be featured on the gallery’s front page, in the Gallery’s YouTube Channel, as well as in the “Solo Art Series” archive.

Claudio is an award-winning self-taught surrealistic artist from Sao Paulo, Brazil. His "The Theater of Life" series of paintings are a collection of characters that represent everyday feelings, but which are not just robes and a mask. Claudio will now be promoted by the gallery with an extensive public relations campaign.

In addition, as part of his award package, Claudio will now be featured as a Light Space & Time – Artwork Archive promoted artist.

Claudio’s art will also be featured on the gallery’s YouTube Channel and with an event postcard.

Below are Claudio’s Artist Biography and Artist Statement, along with 15 of his paintings. We hope that you will take the time to read Claudio’s information and to take a look at his colorful surrealistic “Theater of Life” series of artwork.

Born in 1954 in Sao Paulo, Brazil, Claudio has been an artist from his early beginnings. At the age of 4, he was already modeling small clay animals with immense ease. It was then that his uncle Bernardo Cid, also an artist and Claudio’s main artistic inspiration, took note of his gift. Bernardo encouraged Claudio to pursue his talent and ended up being one of the main motivators of Claudio’s artistic career.

Primarily self-taught, at age 11, Claudio was already selling his own canvases. Since then he has continued painting and illustrating. He later graduated with a degree in industrial design, from Mackenzie in São Paulo, further perfecting his skills.

Claudio headed to Paris, where he would find his artistic inspiration and focus. While there, Claudio exhibited in several shows, taking the first real steps in his artistic career.

His inspiration for his current body of work came while in Paris in 1997. He had the opportunity to view the dressing rooms of the actors of the Opera Garnier and was fascinated by the scenery and costumes. With those images in his head, Claudio gave life to what he calls "The Theater of Life" - a series of characters that represent everyday feelings, but which are not just robes and a mask.

Claudio believes that art is a social representation of all possible sensations that a person can collect during his or her life. With a humorous play of colors and remarkable characters, his paintings provoke different feelings in each person that admires them. Thus, they revitalize memories, bring joy and create a unique experience for the viewer.

My art is based on love for the living being, for nature, through the poetry of the Theater of Life   It is as if the people had left, when the artist painted them or as if they had never arrived. My characters are masked and have no body, only soul and feelings. I paint the love, the energy of people, with joy and freedom of a real dream. The soul and the feelings are undone through the clothes of the characters.  I transform everyday situations with a surrealistic filter, creating fantastic and humorous images.