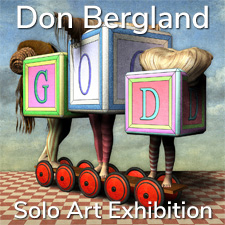 Light Space & Time Online Art Gallery is very pleased to announce that Don Bergland has been selected as one of the four winning artists of the gallery’s recent 14th “Solo Art Series” Art Competition.  Don will now have a month-long solo art exhibition and he will be featured on the gallery’s front page, on the Gallery’s YouTube Channel, as well as in the “Solo Art Series” archive.

Don is an award-winning artist based in Victoria, BC, Canada. Don will now be promoted by the gallery with an extensive public relations campaign.

In addition, as part of his award package, Don will now be featured as a Light Space & Time – Artwork Archive promoted artist.

Don’s art will also be featured on the gallery’s YouTube Channel and with an event postcard.

Below is Don’s Artist Biography, his Artist Statement, along with 25 of his images.  We hope that you will take the time to read Don’s information and to take a look at his Neosurrealistic digital artwork.

Don Bergland is an Associate Professor Emeritus of Digital Art Education at the University of Victoria and has been an active exhibiting artist for over 50 years. During that time, he has worked through a variety of professional media, from oil on canvas to his current studio use of digital tools and techniques. He maintains an active international exhibiting career and has featured his artwork in over 160 major exhibitions throughout the world.

He has published 8 books dealing with art and creative activity, as well as published dozens of articles in scholarly and academic journals. His current studio focus is in using 3D modeling environments to create surrealistic imagery for international exhibitions. He currently lives and teach in Victoria, BC, Canada.

Don Bergland describes his current work as a version of Neosurrealism with the objective of eliciting questioning attitudes in the mind of viewers. He creates his work using both traditional and digital tools, focusing on an integration of 3D modeling software and various graphic processing programs. Each of his artworks features a theatrical set defined by a stage with actors, props, and a backdrop. The actors in the set consist of everyday objects brought into combinations and interactions that attempt to elicit inquiry.

The content of the artwork focuses on themes such as time, aging, nostalgia, the footless pursuit of Utopia, and the conditions of ideology which disable our rational minds. Each image is constructed using conventions of visual realism, but with alterations that offer dreamlike possibilities. Themes and objects appear and re-appear from image to image.

Each artwork becomes a framed snapshot of a moment in theatrical space, noticed briefly, and then forgotten once more, a fraction of time when reality is breached and a frozen glimpse into the mental theatre of Eternity is experienced, an opening when the viewer can catch the faint hint of cotton candy breezing in from the sideshow midway, the pastel moment of a lost memory, a slight reminder that the past is never absent, and that the future is always in front of us.