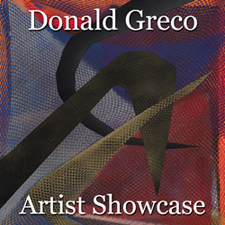 Light Space & Time Online Art Gallery is tremendously pleased to announce that Donald Greco has been named as the Gallery’s new featured artist and he will now be promoted by the gallery for the next 14 days in the gallery’s Artist Showcase.

Donald Greco is a Salt Lake City, Utah artist.  Donald creates beautiful abstract art.  Donald was selected as 1 of the top twelve finalists of the gallery’s recent Solo Art Exhibition Series #10. The placement in this competition qualified his art to be showcased in this feature.

Donald’s Artist Showcase feature will be promoted to over 350+ major news outlets, with inclusion on Google News & Bing News. In addition, the gallery will also be featuring and promoting his abstract art in the gallery’s various social media networks for further exposure.

Below are Donald’s Artist Biography, Artist Statement and 5 images that were submitted to this competition.

Born in New York City, Mr. Greco has been hankering to express his visions, thoughts, and emotions since he was a young boy. Enraptured by the mountains and beauty he found in a short visit to Utah, Mr. Greco decided to relocate in the late 1980's.

After arriving Mr. Greco quickly searched out the art scene, and was introduced to Ken Baxter who recognized his talents and became a mentor and friend of now more than 25 years. Mr. Greco knew from the first day this faithful meeting was not a coincidence, but the perfect timing from a higher power to push his artistic passions even further.

In his early years of experimenting, there was no premeditated vision of the end result, up until the Golden Moon. Followed by "Heaven's Crying" which was inspired by his late wife Kimberly. Heaven's Crying was painted after the death of Eric Clapton's son with the hope she could one day give it to him, following her own death in 2010 he added her image to the painting.

Mr. Greco is primarily self-taught, drawing inspiration from Bob Ross, and guidance from his mentor Ken Baxter. He has perfected a unique multi-step process using broken automotive glass, metal shards and other items creating a style that is all his own.

Painting abstract art enables him to capture the very soul of what he sees and the deepest thoughts of what he feels. The title of the paintings are his interpretation, but the beauty of abstract art is that it allows the viewer to interpret it with their own imagination making it personal. His art has been shown at the Utah Arts Festival, Access Art Exhibition and the Springville Museum of Art.

Loving to paint abstract art, gives me the freedom to create with a style uniquely my own. The title of the paintings are my interpretation but the beauty of abstract art is the same image allows the viewer to interpret it with their own imagination making it personal.

The technique's I've developed over the years is a process in stages, thoughts moods, feelings and emotions are expressed through the paintings. The words "give up" and "quit" are not in my vocabulary. Being self-taught through a long process of trial and error has been a rewarding experience.  Donald’s website:  www.grecolight.com


[Not a valid template]