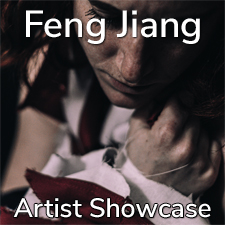 Light Space & Time Online Art Gallery is extremely pleased to announce that Feng Jiang has been named as the Gallery’s new featured artist and will now be promoted by the gallery for the next 14 days in the gallery’s Artist Showcase.

Feng is an award-winning photographer based in Taiwan. Feng was selected as 1 of the top twelve finalists in the gallery’s 14th Solo Art Exhibition Series. The placement in this competition qualified Feng’s art to be showcased in this feature.

Feng’s Artist Showcase feature will be promoted to over 350+ major news outlets, with inclusion on Google News & Bing News. In addition, the gallery will also be featuring and promoting Feng’s artwork in the gallery’s various social media networks for further exposure.

Below are Feng’s Artist Biography, Artist Statement and 5 images that were submitted to this competition.

Jiang Feng is a non-gendered and multi-disciplinary artist working across-genres in movement/dance, theatre, performance art, voice, text, modeling, film, photography and theory. He attained her B.A. in English and Chinese literature from National Taiwan University in 2016. They are the receiver of the 2015 R.O.C. Government Fellowship to study and research dance abroad and “Grants for 20-40-Year-Old Writers” from Ministry of Culture in Taiwan. In September 2019, her new work “Bent-Tai(www)" won the "Genuinely Fringe" award, the third prize, in Taipei Fringe Festival.

Between 2016 and 2019, he was residing in Brooklyn, New York. In 2019, they graduated with an M.F.A. degree in Performance and Performance Studies at Pratt Institute. His performance works have been presented at various venues, including Itinerant Performance Art Festival, Movement Research at the Judson Church, "Thinking Its Presence" conference hosted by the University of Arizona, Exponential Festival, Dance Research Forum Ireland, HOT! Festival at Dixon Place, New Work Series at Tada! Theater, Gibney Dance, La MaMa Galleria, Waxworks at Triskelion Arts, BAAD! and Hudson Guild Theater.

In Taiwan, she has worked with emerging choreographers Shiou Fen Li and KoYang Chang, and has performed at the National Theater and Concert Hall, NTU Center for the Arts, Nadou Theatre, amongst other venues.

In 2018, they were selected to be the performer of the work “Wall-Floor Positions” in the MoMA retrospective "Bruce Nauman: Disappearing Acts."

This series juxtaposes the torn and dirty USian flag with the naked bodies of all genders, races, sexuality, nationality, and cultural backgrounds. I am interested in critiquing the United States as the dreamland and shelter for people and immigrants. The U.S. was alleged to be the most open and tolerant country but it fails to welcome people from various backgrounds equally.

This series aims to document and capture people's bodies, their vulnerability, emotions, and strength through/with the cut USian flag. Everyone was invited to join the project because most of the people are immigrants in some ways at some point in history in the country even if they're citizens now.

Moreover, I am interested in the body, not some mainstream beauty. I encourage people all to model nude because I am not interested in censoring any specific body parts. Also, if they are part of the body, they deserve to be seen/there.