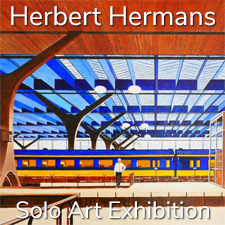 Light Space & Time Online Art Gallery is very pleased to announce that Herbert Hermans has been selected as one of the four winning artists of the gallery’s recent 14th “Solo Art Series” Art Competition.  Herbert will have a month-long solo art exhibition and he will be featured on the gallery’s front page, in the Gallery’s YouTube Channel, as well as in the “Solo Art Series” archive.

Herbert is an award-winning artist based in the Netherlands. Herbert will now be promoted by the gallery with an extensive public relations campaign.

In addition, as part of his award package, Herbert will now be featured as a Light Space & Time – Artwork Archive promoted artist.

Herbert’s art will also be featured on the gallery’s YouTube Channel and with an event postcard.

Below is Herbert’s Artist Biography and Artist Statement, along with 20 of his images.  We hope that you will take the time to read Herbert’s information and to take a look at his artwork.

Herbert Hermans was born in 1947 in Voorburg in The Netherlands. Since the end of the 80s, Hermans has been a passionate painter and he owns an atelier at the Vest in the historic city center of Gouda. His work consists mainly of oil paintings, with his major theme being industrial and cultural heritage.

Hermans has followed different courses in acrylic, water media and oil painting at the Dutch Art School SKVR in Rotterdam in The Netherlands. The last decade his work mainly is concentrated to oil paintings. He followed workshops and courses at the studio of Clara Miedema, a well-known oil painting teacher in Rotterdam.

The main theme of his work is industrial and cultural heritage. Sources of inspiration for his paintings are abandoned and often ruinous buildings. He records these often before demolition by photographs and sketches. Use of colour and use of light make his paintings special events. Dark disconsolateness is changing into light and warmth. Regularly he adds characters into his paintings who provide another or an extra dimension to the image, like brides, monks and observers. The tension in their relation is sometimes nearly tangible. Besides the oil paint for the top layers, he mostly uses acryl paint as ground-colour or priming.

In several paintings, he has used gold foil, acryl modelling and glazing gel. Herman has received several national and international awards and his artwork has been published and sold worldwide.

My drawing-master at school was Jan Asselbergs, a famous Dutch painter stimulated me to elaborate this work, but in that time I choose to be a lawyer, but I have always made drawings and paintings in addition to my legal career. During the past decades, the scope of my work has expanded and now I like to draw the viewers’ attention to the reality, which is not to be seen at first sight and that is displaced. I am fascinated by the use of perspectives, precision and colour to create a strange environment for people in historical and often ruinous buildings.

My work is inspired by the paintings of the famous artists like M.C. Esscher, Carel Willink and Edward Hopper. My style is realistic, but I want to avoid the photorealism and treat the buildings and subjects in a special way. Despite the image's realism, it maintains an air of fantasy. My style is often eclectic by combining persons and buildings from different places and surroundings. The paintings are immersed in a sometimes surreal aura, making the ‘incredible’ is highlighted. With emphasizes on the narrative intent I want to take the viewer on a socially critical charged journey and make him conscious of new perspectives on reality and illusions of reality.

I use a variety of media, including photography and sketches, to explore architecture and space. Mostly I visit the buildings that I want to paint. I am continuously fascinated by how drawings and paintings can be formed to create space. My paintings develop through observation and are a response to the places that I have visited in real life. Often I begin my work by noticing details of the environment; the way light filters through a window, for instance, or the play of shadows on a wall. Then I make additions, such as the use of acrylic pasta and colour, which accentuates the phenomena I observed.

Working back and forth between photography and painting, I develop layers, both in the work itself, as well as in the process of its creation. In this way, my work parallels multiple layers of perception involved in the experience of the historic and industrial heritage. I enjoy the investigation that is needed to figure out just what it is one is looking at. By transforming what seems to be real, I hope to reveal more complex and mysterious dimensions by drawing attention to the different layers my paintings consist of. When the perspective is shifting or will be distorted, new understanding of the reality becomes possible.

To see more of Herbert’s work, please visit his website.