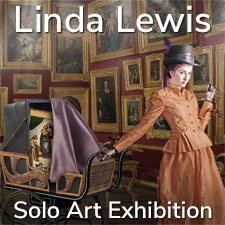 Light Space & Time Online Art Gallery is very pleased to announce that Linda Lewis has been selected as one of the four winning artists of the gallery’s recent 19th “Solo Art Series” Art Competition.  Linda will now have a month-long solo art exhibition and she will be featured on the gallery’s front page, in the Gallery’s YouTube Channel, as well as in the “Solo Art Series” archive.

Linda Lewis is an award-winning artist based in Texas, USA. She will now be promoted by the gallery with an extensive public relations campaign.

In addition, as part of her award package, Linda will now be featured as a Light Space & Time – Artwork Archive promoted artist.

Linda’s art will also be featured on the gallery’s YouTube Channel and with an event postcard.

The “Solo Art Series” is a series of monthly solo art exhibitions for established artists who have a body of work to present to the public.  Artist participants were asked to submit the following 3 components for the “Solo Art Series” competition: 1. Their art.  2. Their artist biography.  3.  Their artist statement.  These elements were evaluated and judged, which resulted in the selection of the artists who will be featured in individual month-long solo art exhibitions.  This was the 19th “Solo Art Series” Art Competition that the gallery has conducted.

Below are Linda’s Artist Biography, her Artist Statement, along with 20 of her digital artwork.  We hope that you will take the time to read Linda’s information and to take a look at her artwork.

Linda Lewis received a Master of Fine Arts degree in 1997 from Arizona State University in Tempe, AZ, USA. During the course of her study, she received a Fulbright scholarship to study at the Danish Design School in Copenhagen, Denmark. Her research culminated in the development of an original technique as well as an adapted technique both of which she utilized in her MFA thesis. Upon her return to the US from Denmark, she received the graduate school's highest award, the Nathan Cummings Foundation Summer Travel Fellowship. This award allowed her to travel to any destination in the world. Her trip included Croatia, Romania and Turkey.

This biography covers Lewis’ history in the genre of fiber art and her subsequent shift to digital art after 2005. Lewis reports that she doesn’t know where her attraction to the visual arts came from, but, as a child, her Mother saw to it that she was enrolled in a variety of classes in the arts, such as drawing, dancing, and performing. Later, her interest in crafts was inspired by a friend who was a weaver. After moving to the craft rich Appalachian Mountains, Lewis promptly enrolled in a weaving course at Appalachian State University. She began weaving sculptural baskets and purchased her own loom. This was all while she was studying for a master’s degree in Sociology. After completing the MA degree she became determined to study for an MFA.

After the completion of her MFA, Lewis developed an extensive exhibition record that includes national and international solo and juried exhibitions. After moving to Texas in 2005, she gradually shifted to exclusively creating digital photomontages in Photoshop. While in graduate school a presentation on digital media intrigued her. Post-graduation, she took a beginner’s course in Photoshop, but is mostly self-taught. Lewis began entering her digital art into exhibitions and won first prize in the category of digital art media at the 45th International Art Show at the Brownsville Museum of Fine Art in TX.

In 2019, Gallery Ex Machina invited her to participate in a two-person exhibition in Barcelona, Spain in January of 2020. The gallery promotes itself as “the world’s first Cyberpunk and Steampunk themed art gallery.” Initially, she wondered how her artwork fit into the genre the gallery specializes in. It was pointed out to her that she was utilizing steampunk imagery in her art. That intrigued her, so she began to research the topic and realized Steampunk imagery would be a wonderful vehicle for expression. But more than that, it is the humor and spectacle that derives from a post-modern mash-up of fashion, machinery, safety equipment, and doomsday clocks that fascinated her. Ultimately, 12 pieces of artwork were selected from Lewis’ steampunk portfolio for the exhibition.

Lewis likes to work within a theme, and her portfolio includes themes developed on myth, murder, savagery, cults, drugs, music, legends, travel, and water—among others.

I create digital photomontages that are composed in Photoshop. Images are selected from original and secondary resources (creative commons, public domain). I generally work in a series format. The submitted artwork is from a series of work that I developed for an exhibition in Barcelona, Spain. The one constant in my artwork is my desire to present a social critique of culture. This stems from my studies in sociology and anthropology. I am particularly interested in the history of ideas and the development of ideological systems.