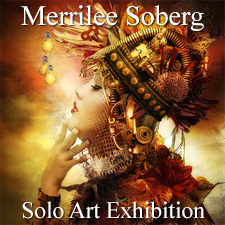 Light Space & Time Online Art Gallery is very pleased to announce that Merrilee Soberg has been selected as one of the four artists of the gallery’s recent 13th “Solo Art Series” Art Competition.  Merrilee will now have a month-long solo art exhibition and she will be featured on the gallery’s front page, in the Gallery’s YouTube Channel, as well as in the “Solo Art Series” archive.

Merrilee is an award-winning photographer and digital artist based in British Columbia, Canada. Merrilee will now be promoted by the gallery with an extensive public relations campaign.

In addition, as part of her award package, Merrilee will now be featured as a Light Space & Time – Artwork Archive promoted artist.

Merrilee’s art will also be featured on the gallery’s YouTube Channel and with an event postcard.

Below is Merrilee’s Artist Biography, her Artist Statement, along with 20 of her images.  We hope that you will take the time to read Merrilee’s information and to take a look at her digital artwork.

After retiring from a successful career as a professional potter, Merrilee turned to photography and digital art to fulfill the need for a creative outlet. Just as Merrilee did with her pottery, she took the "teach yourself by trial and error" approach with her digital art. However her digital skills and artistry took off with her enrollment in Sebastian Michael's Photoshop Artistry online courses. As a result she has been published in numerous editions of "Living the Photoartistic Life" magazine.

Many of the photos used in Merrilee's compositions were taken at home on Vancouver Island on the west coast of Canada or during her world travels. She is passionate about photographing wildlife in their natural habitat. Other elements of nature often find their way into her artistic creations: trees, grasses, leaves, feathers, flowers, mushrooms and so much more. These photos combined with digital painting are the building blocks to create inspired, unique works of art.

Merrilee currently teaches photoshopping techniques to seniors as a way of paying forward her enthusiasm and knowledge in the photoshopping field.

Digital composite art is my passion. The camera and digital software are my tools. I don't know what my life would be like without them. I create for hours in a timeless zone, guided by my intuition. Each piece begins with a blank, white digital "page". Next I remove the face from his or her original background and then proceed to create an imaginary world that can be beautiful, intriguing, moving and at times thought provoking. With these images presented here I've focused on the resilience, strength and connectedness of the human spirit. Elements of nature dominate most of them. I feel so blessed to live at the edge of a wetlands and often run outside with my camera to capture grasses blowing in the wind or wilted flowers ready to fall from their stems. Everyday nature inspires me. Nature and the human face....what a magical combination to work with.