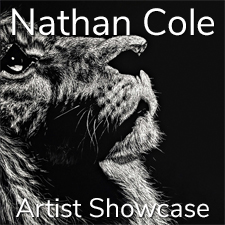 Light Space & Time Online Art Gallery is extremely pleased to announce that Nathan Cole has been named as the Gallery’s new featured artist and he will now be promoted by the gallery for the next 14 days in the gallery’s Artist Showcase.

Nathan is an award-winning artist based in the city of Toronto in Ontario, Canada. Nathan was selected as 1 of the top twelve finalists in the gallery’s 19th Solo Art Exhibition Series. The placement in this competition qualified his art to be showcased in this feature.

Nathan’s Artist Showcase feature will be promoted to over 350+ major news outlets, with inclusion on Google News & Bing News. In addition, the gallery will also be featuring and promoting his artwork in the gallery’s various social media networks for further exposure.

Below are Nathan’s Artist Biography, Artist Statement and 5 images that were submitted to this competition.

Nathan Cole is an artist, photographer, and writer working out of Toronto, Canada. A graduate of the Honours BFA program from Western University in London, Ontario in 2003, Nathan is now emerging as a professional artist after rediscovering the scratchboard medium in 2013. He is best known for his intricate and emotional portraits of highly expressive animals on scratchboard. He carefully uses negative space and the starkness of black-and-white to create engaging chiaroscuro compositions, sometimes playful, sometimes profound. The intensity and diversity of the lines created with the quill depict colour, texture, and depth all at once. The painstaking, slow, and unforgiving nature of quill on scratchboard works relates closely to the careful approach that must be taken for conservation efforts with these animals and their habitats. The combination of wildlife and domestic animal portraits is meant to create a commonality between the two, asking whether one has more inherent value than the other.

Nathan attended the Mauser EcoHouse artist residency in Costa Rica after winning the Nanci Christopher photography grant and participated in the Farm Studio residency in Andore, Rajasthan, India. He has exhibited his work at the Super Wonder Gallery, Queen West Art Crawl, and Beaux Arts Brampton, as well as Eduardo Lira Gallery in Miami where he was a semi-finalist for ARTBOX.Projects and The Treasury in Pontiac, Michigan where he won 3rd place in the Handcrafted Category. Nathan’s art work has also been featured in Murze and ArtAscent Magazines. Through his work and experiences with the animals that he depicts, he is hoping to challenge some of the myths, perceptions, and preconceptions surrounding wildlife. Stories and imagery are incredibly important, and our understanding and relationship with nature is so often based around them. With the awareness that for some of these species, their very existence is at stake in our current world, Nathan hopes to challenge harmful practices through representation, education, and his own process of rewilding.

Nathan’s work has been greatly informed and enhanced by international artist residencies, and the incredible diversity of wildlife surrounding them. He explored the lush valleys and winding waterways of Puntarenas, Costa Rica during the Mauser EcoHouse, then the desert landscape and rocky hills of Rajasthan while attending the Farm Studio residency in India. He has exhibited his work across North America and internationally, including in the Arizona-Sonora Desert Gallery, Zurich Main Station, and the John B. Aird Gallery in Toronto. Awards for his work include 3rd place for the Boynes Emerging Artist Award, Best in Show for “Artists of the World” show at the Tall Sequoia Gallery, and a semi-finalist at ARTBOX.Projects Barcelona and Miami. His scratchboard work and photography have been published in ArtAscent and Murze Magazines. Nathan has a BFA from Western University in London, Canada.

Scratchboard, by its very construction and purpose, is a very fragile medium - you create by taking away and any missed stroke could ruin what you have created so far. Humanity and its relation to nature is quite similar. Humans create their society by taking away, cutting down and stripping the resources to create their cities and culture. Their impact on the wildlife and habitats around them is deeply affected by this process, but also in how they build their culture, the stories told and myths created. The perception of particular animals due to their place in history can very well determine their livelihood. Are the animals viewed as a threat to humans, are they treasured for their fur or meat, do they have mythic properties on the black market, or are they perceived as a pest to be rid of? Does your pet have more inherent value than a wild creature? Creating expressive animal portraits with scratchboard creates a tenuous relationship between viewer and creature, where historical and cultural perceptions can deeply affect how they see the animal in front of them. The painstaking and slow process of creating the art is echoed by the careful approach that must be taken for examining some of the myths and perceptions of these animals and how that may affect conservation efforts. In this way I hope that by creating art, I can improve the relationships of humans and the cities they live in to the wildlife surrounding them.