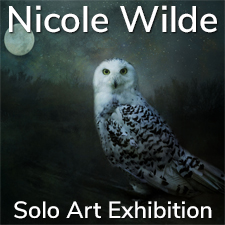 Light Space & Time Online Art Gallery is very pleased to announce that Nicole Wilde has been selected as one of the four winning artists of the gallery’s recent 17th “Solo Art Series” Art Competition.  Nicole will now have a month-long solo art exhibition and she will be featured on the gallery’s front page, in the Gallery’s YouTube Channel, as well as in the “Solo Art Series” archive.

Nicole Wilde is an award-winning artist based in the California, USA. She will now be promoted by the gallery with an extensive public relations campaign.

In addition, as part of her award package, Nicole will now be featured as a Light Space & Time – Artwork Archive promoted artist.

Nicole’s art will also be featured on the gallery’s YouTube Channel and with an event postcard.

The “Solo Art Series” is a series of monthly solo art exhibitions for established artists who have a body of work to present to the public.  Artist participants were asked to submit the following 3 components for the “Solo Art Series” competition: 1. Their art.  2. Their artist biography.  3.  Their artist statement.  These elements were evaluated and judged, which resulted in the selection of the artists who will be featured in individual month-long solo art exhibitions.  This was the 17th “Solo Art Series” Art Competition that the gallery has conducted.

Below are Nicole’s Artist Biography, her Artist Statement, along with 20 of her digital art photographs.  We hope that you will take the time to read Nicole’s information and to take a look at her artwork.

Nicole Wilde was born in Brooklyn, New York. She grew up writing poetry and short stories, followed by song lyrics, some of which were put to music in the bands in which she played bass guitar. However, Nicole always felt California’s siren call of freedom and creativity.

In 1987, she moved to Los Angeles. Longing for a way to express her creativity in a visual format, she purchased a camera and began learning photography through books, online videos, and workshops. She expanded her knowledge of Photoshop in the same way and eventually combined the two disciplines, thereby finally finding her creative outlet in digital art.

Nicole’s other lifelong passion is animals. She has volunteered at rescues and shelters, photographed dogs to improve their chances of adoption, and co-ran a rescue sanctuary in California for wolves and wolfdogs, where three of the residents came home to live with her for ten years until their passing. She is also an avid bird-watcher. It was inevitable that Nicole’s love of animals and nature would find its way into her art. All images begin with one or more of her photographs, which are taken in natural settings, zoos, or sanctuaries. The photos are then combined, altered, or enhanced using equal parts Photoshop, creativity, and imagination to create a work of digital art. Nicole’s artwork has won international awards, been displayed in galleries, and been featured in magazines.

Animals. Nature. Emotion. Connection. These are the things that drive my passion to create art. My work is about the emotional life of animals, the interconnection of all beings, and the unseen magic that surrounds us all. Each piece begins with one or more of my photographs. By applying equal parts Photoshop and imagination, bit by bit an image is transformed into a fantastical universe, or an artistic portrait with deep texture and emotion. My hope is that my art touches the soul, stirs the emotions, increases our respect and appreciation for animals, and acts as a catalyst to reflect on the beauty and magic that is within us and all around us.