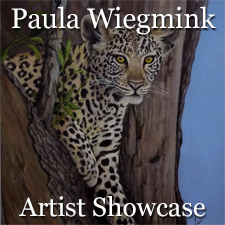 Light Space & Time Online Art Gallery is extremely pleased to announce that Paula Wiegmink has been named as the Gallery’s new featured artist and she will now be promoted by the gallery for the next 14 days in the gallery’s Artist Showcase.

Paula is an award-winning artist based in Dunsborough, South Western Australia. Paula was selected as 1 of the top twelve finalists in the gallery’s recent 12th Solo Art Exhibition Series. The placement in this competition qualified her art to be showcased in this feature.

Paula’s Artist Showcase feature will be promoted to over 350+ major news outlets, with inclusion on Google News & Bing News. In addition, the gallery will also be featuring and promoting her artwork in the gallery’s various social media networks for further exposure.

Below are Paula’s Artist Biography, Artist Statement and 5 images that were submitted to this competition.

Award-winning artist, Paula Wiegmink, was born in Rhodesia/Zimbabwe. She currently resides in Dunsborough, South Western Australia with her husband and children.

Having spent her early childhood on farms, she soon developed a love for the African bush and wildlife. Her interest in drawing and painting emerged at a very early age. Encouraged by her mother, she started sketching the animals on the farm and doing portraits of anyone willing to sit still long enough!

Paula spent twelve years training in the RAD - Royal Academy of Dancing and performed with the Rhodesia National Ballet. She taught dancing for twenty-five years, as well as conducting art classes at a private school in Salisbury/Harare for 3 years.

After migrating to Johannesburg, South Africa in 1979, she resumed her career teaching classical ballet and modern dance and judged numerous dance festivals and competitions. During this time, she was also studying art at the Da Vinci Fine Art Studio under the guidance of Carlo Sdoya. “Homeward Bound”, Paula's first exhibited painting at the Brush and Chisel Club, was purchased by the South African Railways.

In 1994, she immigrated to Perth, Western Australia with her family. Shortly after joining the Canning Arts Group, Paula was invited to exhibit as “Artist of the Month”'. She then went on to conduct all media night classes for the next 6 years. Her teaching extended to the Village Club retirement village where she conducted classes and tutored privately for eleven years.

In 2009, Paula launched her first book titled, “Footsteps in Time’, a family journey of her earliest, on her father’s side, from arriving in Africa in 1709 up to 2009. Over a 5-year period, Paula returned to Africa where her research took her on an incredible journey. The book launch coincided with her first major solo art exhibition, “The Winds of Change”.

Now able to immerse herself in her own creativity, expressing her passion for life through her art works, Paula enjoys experimenting with texture and colour, using multi-layering techniques in various mediums, styles and subjects. Through her art, she hopes to create awareness and draw attention to the vulnerability of endangered species and the natural world.

Paula works in various mediums, including oil, pastel, acrylics, watercolour and mixed media. Paula continues to exhibit in both group and solo exhibitions and her work hangs in private and corporate collections around the world.

My love of nature and the diversity of the planets wildlife has and will continue to excite and motivate me. By using my art as a conduit I hope to open dialogue not only about my art practice but also drawing attention to many of the endangered species that are holding on to life by a thread. I do a lot of research about the subject I want to paint and in this way become very involved in the process. Along the way, they often seem to take on a life of their own. I also have a passion for rusty old discarded objects and try to collect them wherever and whenever I can find them, before they disappear altogether. So often things that are old are no longer considered of any use and it is in these objects that I find great beauty.

Over the years, I have been researching wildlife crime with particular interest in endangered species. My artwork is being used in an ongoing global poster awareness campaign, which indicates to me that the visual arts can have and send strong messages. Sometimes these messages can have more impact than the written word. So, for me, my art is about so much more than the exploration of visual beauty. If I am able to connect with the viewer in a way that conveys a message as well as hold appeal and hope for the future then I feel as though I have achieved something worthwhile. The subject matter often dictates to me what medium I should use and, generally, I go with my instincts on this matter. I enjoy experimenting with a variety of mediums and am always fascinated by how a painting can morph during the process of creation. This can sometimes be an easy process and at other time can cause great angst!

Although I have always had a keen interest in art, my own practice was only realized later in life. After bringing up three children it was only when they all left home that, I started on my own creative journey. My journey so far has taken me on an incredible spiritual path, which continues to unfold in a way that both surprises and thrills me. I continue to show my work in collaborative and solo exhibitions and often donate works to various organizations to assist in raising funds for conservation.