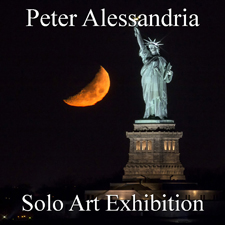 Light Space & Time Online Art Gallery is very pleased to announce that Peter Alessandria has been selected as one of the four artists of the gallery’s third “Solo Art Series” Art Competition.  Peter will now have a month-long solo art exhibition and he will be featured on the gallery’s front page, in the Gallery’s YouTube Channel, as well as in the “Solo Art Series” archive.

Below is Peter’s Artist’s Biography, his Artist’s Statement, along with 20 of Peter’s images.  We hope that you will take the time to read Peter’s information and to take a look at cityscape series.

Peter was born and raised in New York City and Long Island. After attending law school, he moved to Los Angeles to pursue a career as an attorney in the entertainment industry. Today he is an award-winning commercial, portrait and fine art photographer based in New Jersey.

Photography is a second career for Peter. He spent the first part of his work life as an entertainment and intellectual property attorney in Los Angeles. Working in the film and television industries sparked his own interest in creativity and in the early 2000’s he began experimenting with digital video and became an amateur filmmaker. But it wasn't until he picked up a still camera for the first time in 2004 that his full creative passion for image-making came into being.

The first couple of years he took almost 200,000 photos. And when he wasn't taking pictures he was connecting other people online about photography. Completely self-taught, he spent hours, days, weeks and months learning the basics of photography, mostly through trial and error. He also decided to tackle Photoshop and it quickly became his photo editing software of choice. He has become quite proficient in using the software in both his fine art and commercial work.

Like many people, things changed dramatically for Peter in 2008. That year, as a result of the Global Financial Crisis, he lost his law practice. In the days and weeks that followed he struggled with the question of what to do with the rest of his life. It was only after much deliberation that he decided to follow his passion for photography, and in 2009, he began pursuing photography full-time.

That’s not to say it has been easy. Turns out there’s a lot more to running a successful business than passion and creativity. But it is that passion that has carried him through the lean times and today he continues to build his businesses and reach for his optimum potential as both an artist and business person.

As a fine art photographer, Peter has created numerous collections of landscape, seascape, cityscape and still life images. His work has been featured in dozens of solo and group exhibitions. His photos have garnered popular and critical acclaim - he has won thirty-one (31) awards for his fine art photos in the past three years. His work has been the subject of several newspapers, radio and television features, and interviews and he has been published nationally and internationally in professional photography publications.

Peter finds inspiration mostly in the work of other photographers. And not necessarily the famous ones. Rather, it is his peers – most of whom he connects with on social media - that inspire Peter to go out and shoot. This connecting with others on social media has helped fuel his creativity greatly over the last several years.

Today Peter identifies as an artist. His photos are his own unique interpretation of the subject. He starts with traditional photographic techniques in-camera, such as long exposures, to create his art. He then takes the digital file from his camera into the computer and creates his own singular take on the world.

Peter’s intention going forward is to continue to hone his skills as a photographer while being of service to his clients in the commercial and fine art arenas. He also hopes to inspire and educate others interested in photography through lectures, classes, and workshops.

As a photographer and filmmaker my intent is simple: create compelling images that appeal to my own sense of beauty and aesthetics. One day my passion may lead to a misty seaside scene of a lighthouse shrouded in fog, the next to the skyline of a major metropolitan city, and then the next to the quiet solitude of a still life image under my studio lights.

All my photos hold special meaning for me and I love when my work stirs emotion and interest in others. Today I identify as an artist. The digital file from my camera is a jumping off point; it is the gateway for me to embark on my own unique take on the world. I bring a lifetime of passion to every image I create and use my work to touch the lives of others in positive and uplifting ways.