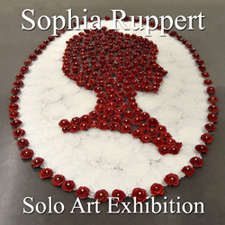 Sophia is a student at Southern Illinois University where she is a double major and is studying to receive her Bachelors of Fine Arts degree in sculpture and a Bachelors of Arts degree in art history.  Sophia will be promoted by the gallery with an extensive public relations campaign, as well through the gallery’s broad social media network.  In addition, Sophia will be featured on the gallery’s YouTube channel, with an event catalog, and with an event postcard.

Below is Sophia’s Artist’s Biography, her Artist’s Statement, along with 15 pieces of Sophia’s sculptures.  We hope that you will take the time to read Sophia’s information and to see here wonderful 3 Dimensional art.

Sophia Ruppert was born in Mishawaka, Indiana on January 24th, 1993. She grew up in the very small town of Nokomis, Illinois and graduated from Nokomis High School in 2011 with high honors. Being a member of the National Honor Society, scholastic bowl, honor roll, band, and the visual arts, Ruppert has always aimed at the highest level of achievement possible. During her four years in high school, she attended four art conventions hosted by Rembrandt Society of the Arts and received several first place ribbons for her two-dimensional works in painting and drawing each year.

In the fall of 2011, Ruppert attended her first semester at Southern Illinois University Edwardsville. There, she began her studies in music and art. By her second semester, she was fully involved in the Art and Design program and focused her class schedule towards receiving a Bachelors of Fine Arts degree in sculpture and later a Bachelors of Arts degree in art history.

Ruppert took her first introduction to sculpture class in the spring of 2013. Since then, she has taken every course offered by the sculpture department, often several times, and has continued to further her knowledge of the three-dimensional arts of sculpture, metalsmithing, and ceramics. She has shown in numerous juried competitions since her first show in 2013 and served as the president of Sculptors at Wagner for four semesters.

In the spring of 2014, Ruppert entered and was accepted to be a finalist in the Sculpture on Campus juried competition. Each finalist receives a stipend to build a large-scale public sculpture to be placed on the SIUE campus for a minimum of one year. For this competition, each artist submits a proposal for a public commission. Ruppert completed her sculpture during the summer and won a  third place by juror Amy Hauft that fall. She was selected again for the SOC competition in 2015 and completed another large-scale public sculpture for SIUE this fall for the competition which was juried by internationally known Patrick Dougherty.

Ruppert was accepted into the Bachelors of Fine Arts program for her portfolio in sculpture in the fall of 2014. Since then, her work has shifted to center on her personal experiences with both domestic and institutionalized sexism with much emphasis on the gender roles of men and women upon marriage. She plans on continuing this theme in her work and showing pieces from this series in juried exhibitions until she graduates in the spring of 2017 with a double major in sculpture and art history. She also plans to present her research in contemporary art history at the Art History Symposium in the spring of 2016. She believes that a substantial knowledge of art history is instrumental in the creative process for any artist.

In the history of our country and in many other patriarchal cultures throughout the world, gender roles have been established and in some cases enforced. In countries such as our own, a man is traditionally seen as the head of a household, making financial decisions and working to support the family. A woman in the same culture is traditionally expected to care for the home and children, keeping close to the family while completing most of the domestic chores. Social learning establishes these roles early in a child’s development and social pressure helps keep them secure into adulthood.

The focus of my recent work has been to describe and discuss the various problems of sexism in the heterosexual nuclear family in American culture. Most of my work comments on various forms of oppression such as traditional gender roles and the identity both men and women are often expected to adopt. Through the use of installation, domestic motifs, and color, narratives are created which should remind the audience of their home and also bring into question parts of these roles which are problematic. The combination of domestic references and sometimes intimidation creates a dialogue which questions multiple issues concerning the traditional roles of women.

Even though deviance from these roles is less taboo today than it was several decades ago, many of the pressures of these gender roles still exist and the issues of sexism are far from being resolved. It is still seen as odd when a man chooses to be a stay-at-home father while his wife works to support the family financially. Also, women who choose a professional career over caring for a family are often seen as differing from the social norm and are criticized for being stubborn and self-absorbed.

These assumptions and expectations have been fueling the drive towards my recent work. Traditional gender roles are oppressive and sexist. The majority of the time, these roles are not considered as such and are even embraced by women as romantic and ideal. I want my work to discuss some of the problems with tradition, help viewers think critically, and decide for themselves whether it is beneficial to keep practicing these social roles which have very oppressive consequences.