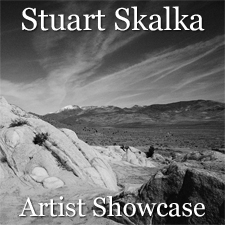 Light Space & Time Online Art Gallery is extremely pleased to announce that Stuart Skalka has been named as the Gallery’s new featured artist and he will now be promoted by the gallery for the next 14 days in the gallery’s Artist Showcase.

Stuart is an award-winning photographer based in Nevada, USA. Stuart was selected as 1 of the top twelve finalists in the gallery’s 13th Solo Art Exhibition Series. The placement in this competition qualified his art to be showcased in this feature.

Stuart’s Artist Showcase feature will be promoted to over 350+ major news outlets, with inclusion on Google News & Bing News. In addition, the gallery will also be featuring and promoting his artwork in the gallery’s various social media networks for further exposure.

Below are Stuart’s Artist Biography, Artist Statement and 5 images that were submitted to this competition.

Stuart Skalka was born in Brooklyn (before it was cool but just before the Dodgers beat the Yankees for the first time) and grew up on Long Island. He has been based in Reno Nevada for over five years.

Stuart Skalka is self-taught. In junior high school, he got his first camera, a Yashica 35mm SLR along with a wide angle and telephoto lens. Through high school, Stuart Skalka developed and printed his own B&W film, and shot color slides as well.

After finishing college and grad school, he lived in Manhattan for 30 years. New York City was very inspiring and photogenic. For the latter part of his time in Manhattan, Stuart Skalka went to the many museums there often, which helped develop his aesthetic.

During the last few years (that ended in 2010) Stuart Skalka lived in NYC, he started doing street photography and figure photography, which he developed further in Las Vegas, Southern California and Reno. Inspired by hiking in the rock formations outside Las Vegas, the Sierra Nevada, and the mountains-and-desert scenery of Nevada, Stuart Skalka has taken up landscape photography avidly.

Stuart Skalka participated in the “Primary Colors” 2019 Art Exhibition of the Light Space & Time Online Art Gallery earlier this year. Through September he will have shown his photos in 13 art shows in the US, including Manhattan, Brooklyn, LA, San Francisco, Tampa, Orlando, Atlanta, Kansas City, Johnson City, Reno and Portland OR. Two of Stuart Skalka’s photos were published in the Abstract (June) issue of ArtAscent. Over the course of the last seven years, he has had solo shows in Reno and Las Vegas.

Stuart Skalka strives to expand the scope of his photography. He has been shooting with a 4X5 camera for the last year, and just took lessons from a large format photographer in Carson City, NV. In June, Stuart Skalka participated in a palladium printing workshop at the Weston Collective in Monterey, CAthat was taught by Ryuijie Douglas. The Weston Collective is run by Kim and Zach Weston, grandson and great grandson of Edward Weston. Stuart Skalka is a member of the Los Angeles Center of Photography.

My aesthetic is to produce original and striking images. The Moon Rocks, in a remote part of Reno, Nevada, are confined to a small area and are not tall. But by shooting them with wide and ultra wide angle lenses (35mm, 21mm and 15mm with 35mm rangefinder cameras; 40mm with my medium format Bronica ETRS), in black & white, results at times in surrealistic images. The black and white films highlight the textures and patterns of the rocks. I shot various films, such as Ilford XP2, Kodak P3200 and Kodak Tri-X. None of my photos has been post-processed.