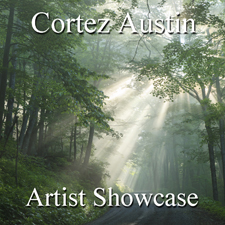 Light Space & Time Online Art Gallery is pleased to announce that wildlife photographer Cortez Austin is the gallery’s newest featured artist.  He will now be presented and promoted in the gallery's Artist Showcase for the next 30 days.

Cortez Austin bought a 35mm camera from a friend in 1976 and started on a long photographic journey which has taken him around the world recording the wonders of nature. Cortez graduated from Howard University in 1970 with a Bachelor of Science degree in Zoology. He continued his education there taking graduate courses in microbiology. It was the great outdoors, however, rather than the laboratory that captured his passion.

In those days of Kodachrome 25 and 64 photography was a very different and more difficult game. Cortez struggled mightily with the conundrum of heavy telephoto lenses and slow film. His progress through the minefields of correct exposure with camera meters (primitive by today’s standards), sharpness, and composition was slow and torturous. Perseverance was the order of the day. It has had its rewards.

Cortez has written articles for and has had his photographs published by some of the most prestigious magazines and book publishing companies such as National Geographic, WildBird, Birder’s World, National Audubon and the Nature Conservancy. He also taught nature photography part-time as a part of the upper school two dimensional art program at St. Albans School in Washington, D.C. for 23 years.

During his 39 year career Cortez has won many awards and recognition in domestic and international competitions such as the Professional Photographers of America International Print Competition with whom he has photos in the coveted Loan Collection. In January he will receive the Master of Photography Degree from them along with a Silver Medal for having all of his images accepted into their most recent competition. Also of note are the numerous awards Cortez has won in the Light, Space and Time exhibits including first place in the Photography and Digital Category of the “Seascapes” exhibit in November 2014

Cortez believes that, as much knowledge as you may accumulate in photography, the best photographers will always be students of the craft. Regarding his quest for photographs he states… “I make many sacrifices of money, comfort and safety to get to where I want to photograph. Once I get there I struggle to see things a new way, to get beyond the standard photograph. Often the most critical “skills” in photography are patience and perseverance in uncomfortable and sometimes dangerous situations.”  His website is www.cortezaustinphotography.com