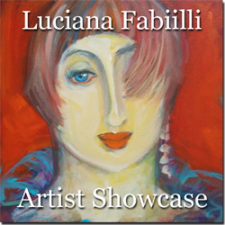 Light Space & Time Online Art Gallery is very pleased to announce that Luciana Fabiilli is the gallery’s new featured artist and for the next 30 days will be promoted in the gallery's artist showcase.

Luciana Fabiilli has successfully created an evocative style that is completely original and at once, instantly recognizable. Her paintings are transformed from subtle use of color via the medium pastel to the vibrant color palette of Dallas, Texas.

Luciana Fabiilli is an International figurative artist whose intention is to paint the Women of Today, yet, also recognize the Women of the Past. Luciana is the epitome of the Renaissance Woman or “The Rebirth of the New Woman”.

As an International Artist, Luciana’s work has appealed to many professionals such as doctors, lawyers, both businessmen and women. They have fallen in love with her and her artworks. The diversity of art collectors intrigued by her work range from Canada, USA, Europe and Middle East.

United States of America awarded her the status of Artists of Extraordinary Ability based upon her credentials and talents as being among the top in the artistic field.

This Italian/Canadian artist credits her art education to Canada and her passion for the arts to her Italian Heritage. She received her Bachelor of Fine Arts Honors Degree from York University in Toronto.

Luciana is the recipient of several prominent art awards, such as Dallas Critics Choice Award, Special Recognition Award in the Women 2013 competition;  Award of Excellence from Manhattan Arts International  and Merit award Portrait category in The ARTIST's Magazine competition amongst 13,000 entries.

Fabiilli was selected as one of the Artists of the 1990's in New York by Manhattan Arts International.  In addition, Luciana was selected for featured articles from several International publications including The Artist's Magazines, Encyclopedia of Living Artists, Dallas Women’s Magazine and the front cover of Grace Magazine.

Her works have also appeared in Dallas Museum of Art, African American Museum & San Bernardino Museum in California.  She was invited to showcase with Art Monaco at Miami River Art during Art Basel 2012. As a result of this, her paintings were televised on several Ecuador channels.

She exhibited in the Solo Art Miami inaugural exhibit showcasing creative minds with a special tribute to Master Cundo Bermudez. Also, her artistic hand has also lent itself to poetry where her work is published in Library of Congress in Washington DC and she was also nominated twice as Poet of The Year.

Upon viewing Luciana's paintings one notices immediately the powerful vibrant colors and the depiction of dynamic compositions and dramatic figures; predominately the subject matter of woman.

However, the spectator is seduced into the picture plane as Luciana states; "My work speaks of painting beneath the surface of the subject matter. I am more interested in the character than the identity.”  Her website is http://www.lucianaart.com