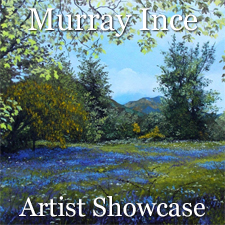 Light Space & Time Online Art Gallery is extremely pleased to announce that Murray Ince has been named as the Gallery’s new featured artist and he will now be promoted by the gallery for the next 14 days in the gallery’s Artist Showcase.

Murray is an award-winning artist based in the United Kingdom. He was selected as 1 of the top twelve finalists in the gallery’s 13th Solo Art Exhibition Series. The placement in this competition qualified his art to be showcased in this feature.

Murray’s Artist Showcase feature will be promoted to over 350+ major news outlets, with inclusion on Google News & Bing News. In addition, the gallery will also be featuring and promoting his artwork in the gallery’s various social media networks for further exposure.

Below are Murray’s Artist Biography, Artist Statement and 5 images that were submitted to this competition.

Murray was born in Newport, Isle of Wight in 1957 where he enjoyed his school days and developed a love of drawing and painting very early on. After leaving school he became a furniture maker and gradually moved into design and manufacture. Murray took up painting seriously, though not full time in the early 1990’s and in 1996 did an A level Art and Design at the local college to gain experience of structured art learning. In 1997 Murray studied for a teaching qualification as he soon discovered a love of teaching people to draw and paint going on to become a lecturer in fine art at the Isle of Wight College. He went on to provide private tuition in his home studio, to demonstrate for art groups and now also tutors two art groups on the Island, The 5 Bells Art Group and the ‘John Finch Art Group’. Murray also leads for HF Holidays, running painting and drawing holidays all over Britain, France and Italy.

Murray’s first love is Landscape painting in Winsor and Newton’s ‘Artisan’ water-mixable oils and has written a book titled ‘Landscape Painting In ‘Artisan’ Water-Mixable Oils’ he is also a featured artist and product ambassador for Winsor and Newton and is a regular contributor of ‘How To’ paint articles for ‘Leisure Painter’ and the SAA’s ‘Paint’ magazines.

Murray regularly exhibits on the Isle of Wight and southern England and can be found painting in his studio in Totland Bay when not teaching away from home. He finds inspiration literally all around him on his beloved Isle of Wight, he says ”the next painting is always just around the corner and who knows, maybe one day a masterpiece”. Apart from ‘O’ and ‘A’ level art qualifications Murray is self taught and attributes his love of art and particularly landscape and seascape painting to his aunty Pat who was the first person to take him to a major art gallery, in this case the National Gallery in London and says that he was ‘blown away’ when viewing John Constable’s ‘Haywain’ and took art seriously from that point onward. Later in Murray’s career he was asked whether the Victorian artist Joseph Murray Ince RA was a relative or was it a coincidence, truth is he hadn’t heard of him but on checking the family history found that Joseph was indeed Murray’s four times great uncle and the name Murray had been passed down the line with Murray receiving it as his Christian name, however Murray maintains the view that anybody can learn to draw and paint!

I have always loved the scenery of the great outdoors and living on a relatively small but beautiful Island is truly inspirational. Of course being surrounded by the sea is wonderful, with a never ending array of coastal views, harbour scenes and the ever changing mood of sea and sky there is truly no end of subject matter. We Islanders are also blessed with a huge diversity of landscape from ancient woodland and chalk down-land to salt marsh and everything in between. I endeavour to portray the natural world to the best of my ability hoping to give the viewer a sense of the beauty as I see it, both here on my Island home and in the world at large. I first saw John Constable’s ‘Haywain’ when I was just 11 years old, the sheer size and beauty of this painting and the portrayal of trees and sky in paint was awe inspiring to me and have loved both the landscape and landscape paintings ever since. I work mostly in oils as with this medium I seem to be able to convey at least a small amount of the affinity I have with the natural world whether it be landscape or seascape and am happiest and enthralled when creating at my easel.