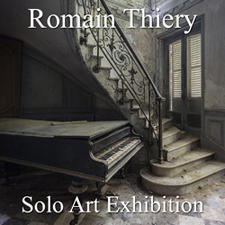 Light Space & Time Online Art Gallery is very pleased to announce that Romain Thiery has been selected as one of the four artists of the gallery’s recent ninth “Solo Art Series” Art Competition.  Romain will now have a month-long solo art exhibition and he will be featured on the gallery’s front page, in the Gallery’s YouTube Channel, as well as in the “Solo Art Series” archive.

Romain Thiery is a Montpellier, France based artist. He specializes in creating piano and heritage photography.  His series “Requiem for Pianos” depicts pianos as lonely centerpieces of the photographs within beautiful and forgotten interiors.  He will now be promoted by the gallery with an extensive public relations campaign.

In addition, as part of his award package, he will now be featured as an Artsy.net Light Space & Time promoted artist.   The LST Artsy.net page will feature 5 pieces of the artist’s art, a small artist statement and their website URL’s as part of the gallery’s overall prize package.

Romain’s art will also be featured on the gallery’s YouTube Channel and with an event postcard.

Below is Romain’s Artist Biography, his Artist Statement, along with 25 of photographs.  We hope that you will take the time to read Romain’s information and to take a look at his beautiful and haunting images.

Professional photographer and pianist, Romain Thiery is specialized in abandoned heritage photography. He is a native of Perigord, a region rich in history and filled with derelict wonders. This is where it all started when he decided to carry on what his own mother had started a few years before: listing those forgotten places. Today he lives and works in Montpellier.

A real passionate person, Romain is fortunate to be able to meet the two artistic worlds that are close to his heart: photography and pianos. The places he is looking for have to meet the criteria that his artistic process requires.

His aim is to capture the atmosphere, space, light, and textures they are filled with and he has to be a crossroads of his two artistic worlds.

“As a pianist myself, emotion takes over when I discover an abandoned piano. This is the aim of my art: my two passions are then united in one and the same feeling”.

To achieve his Requiem pour pianos series, Romain Thiery explored several countries including France, Italy, Belgium, Ukraine, Germany, and Poland. Through his images, the musical notes of these abandoned pianos contrast in these buildings in ruins, giving free rein to our imagination.

The work of Romain Thiery has been constantly evolving and has been exhibited several times nationally and internationally.

He was awarded a prize at Uzès Photography Festival and he has worked with La Volière aux Pianos.

The “Requiem for pianos” series is a proof of Romain Thiery's attachment to music and photography. He says that both are his passions.

Tirelessly practicing Chopin on his grand piano in his workshop-house, he is also the photographer who, on one of his urban explorations, captures the picture of an instrument lying there and further intensifying the mystery surrounding the place.

About thirty of his photographs are focused on a central object: the piano; sometimes with some of its keys missing, sometimes completely dismantled but always sitting imposingly. Impressive and incongruous, it is there. It is where, not so long ago, grace, luxury, and a respected novelty used to reign.

At first, led astray by the natural aesthetics of the king of the instruments, one could have seen some kind of romanticism that could be at odds with the photographer's powerful other works. In the latter, the picture does its job, despite the amazing work on the light: the spectator feels a sense of disquiet -despite the beautiful representation. It is obvious: what used to be no longer is.

Romain Thiery usually produces pictures where aesthetics play with chaos, to better sow confusion in our minds. And then he introduces this element, the natural elegance of which is so reassuring. It must be said that musical instruments are, for us, forever beautiful, almost deified. Thus, even when time damages them, we are attached to them, we respect them.

In a mess that leads us to ask ourselves a hundred questions, a dust-covered piano is erected and its nobleness is striking, its grandeur lies deep within the basics of our culture. The art of the photographer is to show us this arrogant beauty that relegates everything else to the background.

There is one cliché in the piano series that is the epitome of Romain Thiery's calling. In a bourgeois house, in the middle of a room lies a grand piano. There is nothing else. The instrument has lost its legs, it is lying flat. But it is still there. Few things have resisted the attacks of time and looters, except the piano. This is it.

Above all, Romain Thiery has understood that everything but a grand piano can be taken. The inhabitants left and took with them their belongings, and probably their furniture as well. What he wants to show is the importance and the weight of social codes: what better then than an instrument made of two-hundred and fifty kilograms of cast iron delicately set with precious wood? Is the piano an object or a tool?  Thiery’s website is http://romainthiery.fr