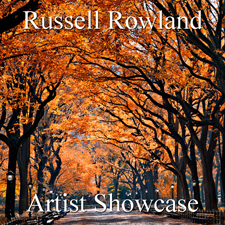 Russell Rowland is a freelance photographer based in the New York City area. Russ began his creative career as a successful executive in the public relations field, where he specialized in providing PR services to consumer and high-tech companies.

After a flourishing career in marketing, Russ reinvented himself and embarked on a career as a professional photographer. Russ always had a love for images, as a little boy he would spend hours looking through his parent’s art books mesmerized by paintings of all kinds.

Russ’s photography is as varied as his subjects. Besides his fine art photography, his portfolio includes portraits, street scenes, landscapes, abstracts, along with the photographs that center on the absurdities of daily life in the city. To pay the bills, Russ photographs corporate events as well as theater productions.

Russell states about his photography “I constantly slip and refer to photographs of as paintings, which isn’t surprising because I see myself less as a photographer and more as an image maker. I believe that distinction frees me to put the end image before any concerns about capturing or staying within the bounds of "reality." The only exception is when I am shooting documentary or journalistic subjects like theater productions or Occupy Wall Street.”

As his website states about Russ’s work “I photograph the things that I cannot paint or put into words.” He is one of the Founding Members of the Melting Shot Photo Collective. This creative group was formed by 5 dedicated photographers who live, work and play in different places around the globe.

Russ’s work has appeared in many shows throughout the country and most recently was seen in the Art of Photography Show (San Diego, 2011, Photo-Centric (New York, 2011) and The Center for Fine Art Photography’s “Dreams” exhibit (Fort Collins, CO, 2012). His work will also be included in the South Street Seaport Museum’s exhibition on the Occupy Wall Street movement that opens in January 2012. In addition, Russ’s photography was recently used in the Theater Review section of the New York Times for their review of “Dedalus Lounge” which is playing at the Interart Theater Annex, in New York City.

Take some time to look at Russell Rowland’s bright, imaginative and thought provoking portfolio at http://www.rrsnapshop.com