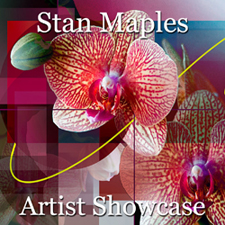 Light Space & Time Online Art Gallery is very pleased to announce that Stan Maples has been named as the Gallery’s new featured artist and he will now be promoted by the gallery for the next 14 days in the gallery’s Artist Showcase.

Stan Maples is a Missouri based digital artist.  Stan creates digital abstract art through a combination of geometric shapes and realistic images of flowers.  Stan was selected as 1 of the top twelve finalists of the gallery’s recent Solo Art Exhibition Series #10. The placement in this competition qualified his digital art to be showcased in this feature.

Stan’s Artist Showcase feature will be promoted to over 350+ major news outlets, with inclusion on Google News & Bing News. In addition, the gallery will also be featuring and promoting his digital art in the gallery’s various social media networks for further exposure.

Below are Stan’s Artist Biography, Artist Statement and 5 images that were submitted to this competition.

Standing at a fold-up chalkboard, Stan Maples, at the age of six took great pleasure in creating images that only a six-year-old could do. Often, Stan would ask his grandmother what the image he was drawing represented. As soon as his grandmother gave a reasonable answer, or not, Stan had the image erased and was busy drawing something else. So was the entertainment, in 1956, in a small West Texas town, known as Sweet Water.

Raised by his grandparents until he was seven, Stan was eventually reunited with his biological father & stepmother. Both parents were involved in military and government jobs and at the age of nine, Stan spent three years in Bermuda, where his father was stationed. It was during the three years on the island that Stan was exposed to tropical wildlife, vegetation, and vibrant colors, which would ultimately be an influence in his artwork.

After leaving Bermuda, Stan spent the next six years in Kansas City, Missouri. It was in 1968, that Stan, made a decision to pursue art, rather than music. In 1969, Stan attended Missouri State University to study Graphic Design. Two years into the art program, a shift from Graphics to Sculpture & Figure Drawing took place. These two areas, captivated Stan's heart as he went on to receive his BFA degree in Sculpture and eventually, completed an MFA in Sculpture, from the University of Nebraska.

Stan has enjoyed creating artwork for over forty years. In 1988, Stan accepted a position teaching art at Evangel University, located in Springfield, Missouri. At the university, Stan taught courses in Sculpture, Graphic Design, Digital Imaging/Painting, and Drawing. It was in the mid-1990's, that Stan became interested in computers and what would later become another shift in his art career, Digital Imaging & Painting.

As a Sculptor and Digital Fine Artist, Stan enjoys the manipulation of three-dimensional space on a two-dimensional area. Stan particularly enjoys the use of ambiguous space and how that space interacts with lines and shapes within a composition". Working with both abstract shapes, lines, and realistic imagery is a challenge that Stan continues to enjoy his artwork today.

Stan does his own photography and uses several photo editing software programs, along with a paint program which allows him to simulate traditional artist medium. Stan enjoys several types of subject matter, florals, landscapes and dogs (particularly Keeshonds).

Over the years, Stan has had numerous one-person exhibitions and his artwork has been accepted in both juried and invitational exhibitions. Stan has artwork in private collections throughout the state of Missouri and in various regions of the United States.

In 2004, Stan was introduced to the corporate art world and since that time to the present has placed over 200 digital fine art pieces within numerous corporations, including Mercy Hospital located in Springfield & Rolla, Missouri, the BKD building located in Springfield, Missouri, and Bolivar Bank located in Bolivar, Missouri. In addition to a lifetime of creating art, Stan enjoys reading, gardening, and showing and training his dogs for obedience and conformation dog shows. Stan currently owns two Keeshonds and has owned this particular breed since 1974.

My work is a combination of abstract geometric shapes, lines, and realistic images of flowers. Transparency and the overlapping of shapes play a large part in the ambiguous space in the artwork. I enjoy gardening and at an early age living in Bermuda with its tropical flowers and vibrant colors has influenced my digital artwork. My artwork is created by using two software programs, Adobe Photoshop, and Corel Painter. I also take my own photographs of the flowers that are used in my artwork.  Stan’s website:  http://k9kees.wixsite.com/stanmaples