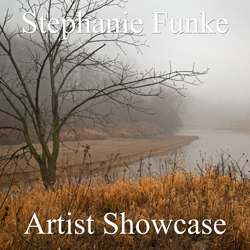 Light Space & Time Online Art Gallery is extremely pleased to announce that the gallery’s latest featured artist is Stephanie Funke and she will now have her photography featured in the Artist Showcase section of the gallery.

Stephanie Funke is an artist living and working in Iowa.  With no formal training in the arts, Stephanie has relied on friends in the photography world, informal classes, books, monthly publications, online resources and experience to help her navigate the world of digital photography and editing software.  As an outlet for sharing her images, Stephanie has a blog with bi-weekly posts that contain her photos and some description of and/or a reflective statement about the pictures.  Look for her Monday and Thursday posts at funkephotos@blogspot.com.

As a teenager Stephanie had an interest in photography and was thrilled to receive her first camera as a birthday gift – a Kodak Instamatic that used a 110 film cartridge along with a flip flash.  That gift provided the foundation for her interest in photographing the outdoors as she started taking pictures of the local landscape and entered those images in the county fair.  After high school Stephanie rarely touched a camera as she pursued her undergraduate and graduate degrees and went on to teach Spanish for 17 years.  In 2010 she left the classroom and once again found time for the camera.  Gradually Stephanie began to photograph backyard birds, garden produce, flowers and scenes from family gatherings.  She also began taking photos of the predictable as well as the unexpected and bizarre elements of the outdoors.  Soon after she upgraded her equipment and never looked back.

The natural world continues to be a primary subject in Stephanie’s work as she is enamored with the environment just outside her door.  As a native Midwesterner, Stephanie is treated to a wide range of weather, including extremes in temperature, precipitation and severe storms.  And, although the cold is very difficult for her to be in, she often ventures out on mild winter days in order to capture the frost as it flocks the trees, giant-sized snowdrifts, local anglers ice fishing, and animals foraging for food on the barren landscape.  For example, some of her favorite and most recognizable images feature turkeys in their winter habitat.  Also, while being outside in the mild winter weather, Stephanie realized that she loves to shoot in the fog as it lingers along the river that winds through her hometown.  To her images it adds mystery, tranquility and simplicity.

Because Stephanie lives in a rural area and has family members involved in agriculture, she also finds herself photographing scenes from the planting and harvesting seasons on the farm.  In addition, she often attends and photographs small-town festivities as these functions showcase the passions and spirit of Iowans.  From Veterans Day parades to rodeos, Stephanie uses her lens to capture the moments and savors the memories through her photos.

In 2014 Stephanie returned to teaching but has continued to embrace photography as a means of self-expression and a creative outlet.  She juggles the demands on her time as she fulfills her duties in the classroom while also staying in touch with her camera.  Recently Stephanie has also become intrigued with the ever-popular doodling craze and spends time practicing this craft while at the same time learning more about drawing, color, lines, patterns, shadows, light and so on.  She is a life-long learner who loves self-expression and the natural world.