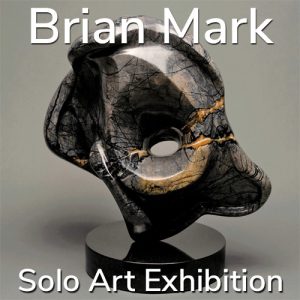 Light Space & Time Online Art Gallery is very pleased to announce that Brian Mark has been selected as one of the four winning artists of the gallery’s recent 21st “Solo Art Series” Art Competition.  Brian will now have a month-long solo art exhibition and he will be featured on the gallery’s front page, in the Gallery’s YouTube Channel, as well as in the “Solo Art Series” Exhibition Archives.

Brian Mark is an internationally acclaimed, award-winning sculptor based in Pasadena, California, USA. He will now be promoted by the gallery with an extensive public relations campaign.

In addition, as part of his award package, Brian will also be featured on the gallery’s YouTube Channel and with an event postcard.

The “Solo Art Series” is a series of monthly solo art exhibitions for established artists who have a body of work to present to the public.  Artist participants were asked to submit the following 3 components for the “Solo Art Series” competition: 1. Their art.  2. Their artist biography.  3.  Their artist statement.  These elements were evaluated and judged, which resulted in the selection of the artists who will be featured in individual month-long solo art exhibitions.  This was the 21st “Solo Art Series” Art Competition that the gallery has conducted.

Below are Brian’s Artist Biography, his Artist Statement, along with 25 artworks.  We hope that you will take the time to read Brian’s information and to take a look at his beautiful stone sculptures.

Born in Schenectady, New York, raised in Washington, D.C., Brian Mark has been intrigued by art of all kinds for most of his life. Literature appealed to him and ultimately, Mark taught English literature at university. While he was doing scholarly work on English literature, Mark began to feel a tug toward doing, not just intellectualizing about art.

Mark’s first artistic foray was in woodworking. After a while, he could not shake the impact Dylan Thomas’ poem, “In My Craft or Sullen Art” had on him. Mark kept feeling he was doing craft, not art, and wanted more. A friend urged him to look seriously at stone sculpture as his art focus.

Eventually, Brian Mark went to that sculpting class, and as he tells it: ‘As soon as I set foot in the studio and looked at the work the students were doing, I was hooked.’ That was 20 years ago. Mr. Mark has been joyfully doing stone sculpting from that date to now. Sculpting is something he simply cannot NOT do. It is a passion.

He creates abstract sculptures in harder stone such as marble, calcite, onyx, and others. He does not strive to make statements with his art, but rather ‘tries to bring beauty into this world, and at the same time soothe his soul by fulfilling the creative process.’ His work has been seen in many art shows and looks forward to continuing his love/work in stone.

Nature is raw. Art is practiced. Each stone has its own language and I work to understand that language. Some of the learning comes from striving to listen to what each stone is saying. Each has a color, a shape, and a hidden beauty. While valuing that uniqueness, I strive to let my imagination fly free, in order build upon nature’s creation: blending raw nature with understanding the language of this stone. And, so begins the conversation between stone and sculptor. When a stone selects me, I cannot know what striations, hues, density, faults, lie under the surface. As I begin chiseling and grinding, the stone talks to me, saying, “I have this special colored line running through me: preserve it”. Or, “slightly shift the angle of this or that curve”. Or, “work with me: together we can bring forth that special surprise, that new beauty never before seen”. The conversation continues until nature’s stone and my imagination marry and together say, “stop – our work is done”. For me that conversation must lead to a sculpture that has movement, movement, movement. That movement is stone brought to life in a way never before seen. 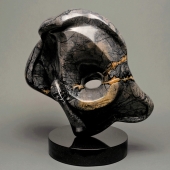 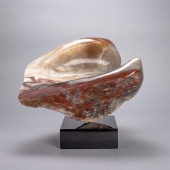 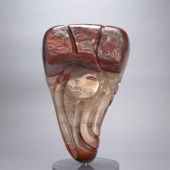 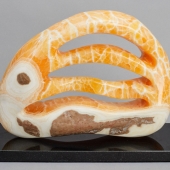 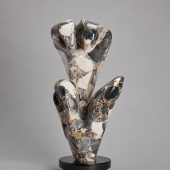 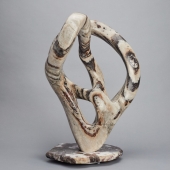 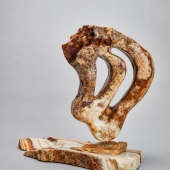 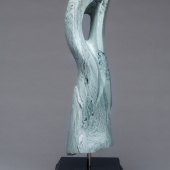 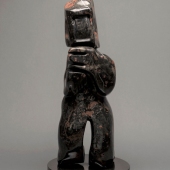 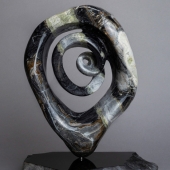 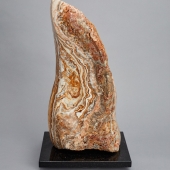 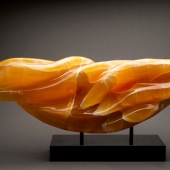 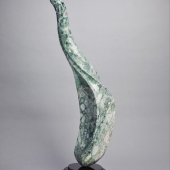 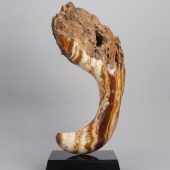 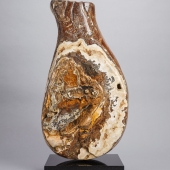 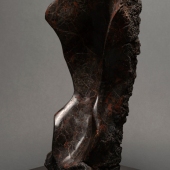 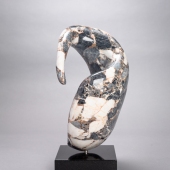 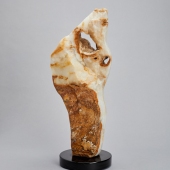 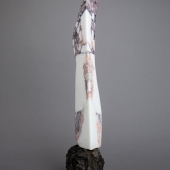 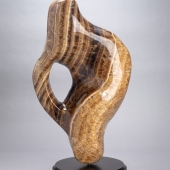 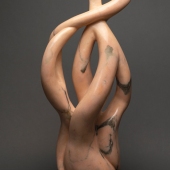 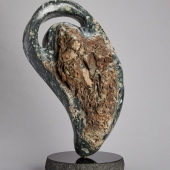 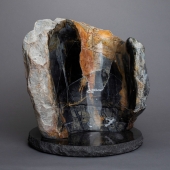 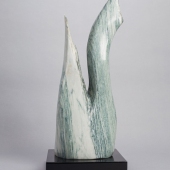 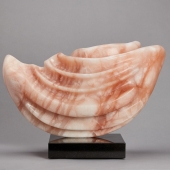