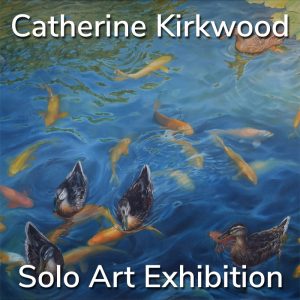 Light Space & Time Online Art Gallery is very pleased to announce that Catherine Kirkwood has been selected as one of the four winning artists of the gallery’s recent 23rd “Solo Art Series” Art Competition.  Catherine will now have a month-long solo art exhibition and she will be featured on the gallery’s front page, on the Gallery’s YouTube Channel, as well as in the “Solo Art Series” Archive.

Catherine is an award-winning artist based in New Mexico, USA. She will now be promoted by the gallery with an extensive public relations campaign.

Catherine’s art will also be featured on the gallery’s YouTube Channel and with an event postcard.

The “Solo Art Series” is a series of monthly solo art exhibitions for established artists who have a body of work to present to the public.  Artist participants were asked to submit the following 3 components for the “Solo Art Series” competition: 1. Their art.  2. Their artist biography.  3.  Their artist statement.  These elements were evaluated and judged, which resulted in the selection of the artists who will be featured in individual month-long solo art exhibitions.  This was the 23rd “Solo Art Series” Art Competition that the gallery has conducted.

Below is Catherine’s Artist Biography and her Artist Statement, along with 15 of her artworks.  We hope that you will take the time to read Catherine’s information and to take a look at his artwork.

Catherine Kirkwood has been painting since she was a child. At age 12 she began oil painting lessons and art was her passion all through school. She attended the School of Art at Syracuse University in Syracuse, N.Y. She also spent a year at the California College of the Arts in Oakland, Ca. and received her B.A. in drawing from the University of New Mexico. She continued at the University of New Mexico and received her M.A. in painting in 1974. From there she moved to New York where she worked and painted for several years before moving to Santa Fe, N.M. where she currently resides. She has shown nationally and won numerous awards for her work.

Catherine has always been a realist and her work is involved in images from the natural world. For many years she painted the southwest landscape and then became intrigued with water. She has painted water gardens over many decades and after a two year move to Miami, Florida began using plants and flowers in her work. In the past year she has been photographing at a local flower farm which has resulted in large canvases of flowers enlarged beyond their true size.

Complexity is a feature of Catherine’s work. She involves herself with detail and the paintings are full. It is the artist’s hope that the viewer will be able to visit a painting many times and still find new elements to explore visually.

I have been painting for as long as I can remember and don’t think I ever seriously considered any other path in life other than that of an artist. I lived in New York City for several years in my mid-twenties but am happier in the country. My work is rooted in nature and that is where I gain inspiration. I have always been drawn to realism although I am straying further away from strict adherence to the photograph as I progress along in my career. I spent years drawing but a brush is really my most natural tool. The color and richness of oil paint along with the extended period of workability make it my favorite medium.

I grew up on the East Coast and spent my summers swimming and in the winter, I walked the beach for solitude and contemplation. My series of water paintings started in Santa Fe in the desert southwest, away from water. I am drawn to the quiet and “otherworldliness” of water, the sense of things hidden in the depths. I am visually fascinated by the different layers one sees when looking at the water—the reflections of the sky, the movement on the surface and the abstraction of what is below the surface. Water lilies and koi add another dimension of color and form above and under the water.

I consider myself an interpreter of nature and as an artist, someone who greatly appreciates the beauty of nature through using it as my model. 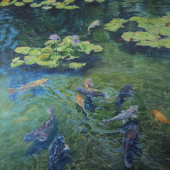 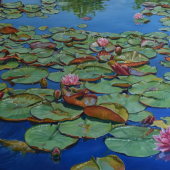 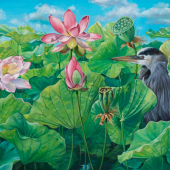 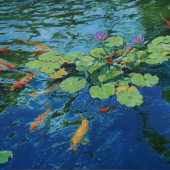 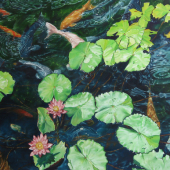 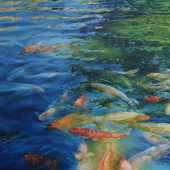 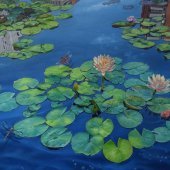 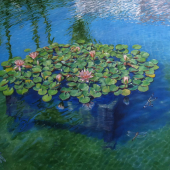 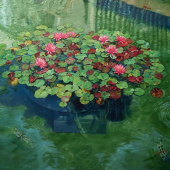 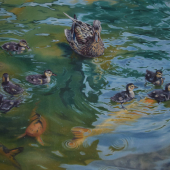 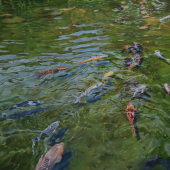 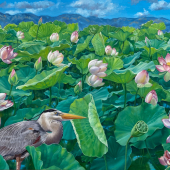 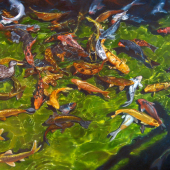 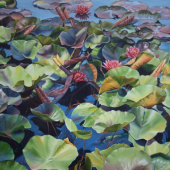 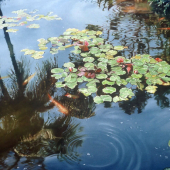 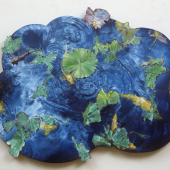 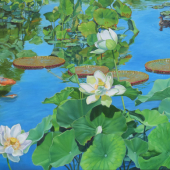 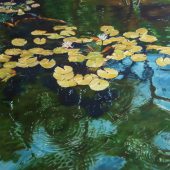 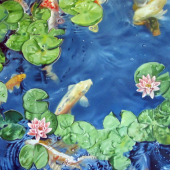 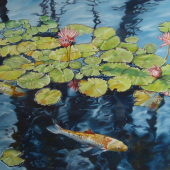 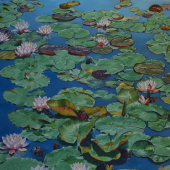 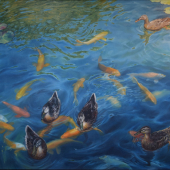 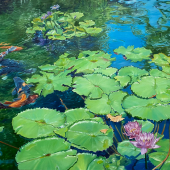 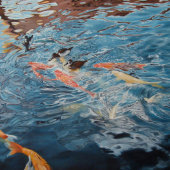