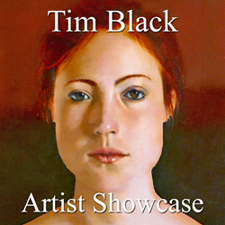 ight Space & Time Online Art Gallery is very pleased to announce that Tim Black has been named as the Gallery’s new featured artist and he will now be promoted by the gallery for the next 14 days in the gallery’s Artist Showcase.

Tim Black is a Wisconsin based figurative and landscape painter.  In his works Tim’s aim is to convey the beauty and softness of the female form.  Tim was selected as 1 of the top twelve finalists of the gallery’s recent Solo Art Exhibition Series #7. The placement in this competition qualified his art to be showcased in this feature.

Tim Black’s Artist Showcase feature will be promoted to over 550+ News Outlets, Premium News Outlets (ABC, CBS, CW, Fox & NBC TV) & Radio Sites and inclusion on Google News & Bing News.  In addition, we will also be featuring and promoting his art in our various social media networks for further exposure.

Below is Tim’s Artist Biography, Artist Statement and 5 images that were submitted to this competition.

Tim Black began painting & drawing landscapes of the Texas Gulf Coast when he was around 10 years old. Growing up with dyslexia and finding the written word to be a confusing ordeal, the world had become much more visual to him.

He was awarded a full scholarship to the Arkansas arts center in 1965 and continued there until 1968, graduating with a triple major. He also attended, with a full scholarship, the Peninsula School of Art and the Aspen School of Art in the summers of 1966 and ’67. His education consisted of intense study of the human figure in drawing, painting, and sculpture.

In the 1980’s, he taught himself large format photography and spent 10 years pursuing that interest. He then returned to painting with different attitude toward painting the still life, portraits, and landscapes. In 2012, Tim decided to move away from the art scene after having shown in galleries in DC, Chicago and St. Louis. He moved to a very small town in northern Wisconsin where he hoped to delve into whatever might interest him as a painter.

In a sense, Tim was reinventing himself as an artist. He found that painting the female figure was a challenge to which he wanted to devote his efforts. On average he has spent up to 100 hours on a painting layering in glazes of oil color. The aim is to create a realistic image that engages the viewer and hopefully make them think about the art that is before them.

This past October he decided to take on only 6 paintings over the course of the winter. He had a set size of 20 x 20 inches and the subject was female portraits. He has just now completed the last two.

Jean-Paul Sartre said, "in the relationship between the will to create and the finished work, no one can say what tomorrows painting will look like.” Through the ages there have been painters that we all look at and wonder, how did they accomplish that? As the years have gone by some of those questions have been answered. We borrow from each other out of admiration for what another has achieved.

In the craft of my painting my aim is to convey the beauty and softness of the female form. The key to success is to establish a palette that will capture that dazzling sensual nature they possess. I find the music of Arvo Part helps create a tranquil mood in my studio that in the early stages of a new painting helps me to generate a quietness in the figure. By keeping the colors soft and blending the edges, I use many layers of color with the intent to convey the figures inner warmth.

Each painting leads to the next and I usually have three paintings in different stages of completion. This allows me time to layer color and to work out problems. Painting keeps my mind active and engaged in the examination of excellence.

Like most artists I see my mistakes and sometimes that over shadows my efforts; but every once in a while I produce something that amazes even me, and those are the times I live for.