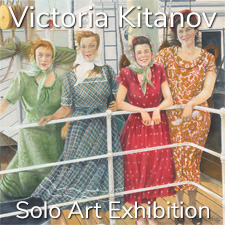 Light Space & Time Online Art Gallery is very pleased to announce that Victoria Kitanov has been selected as one of the four winning artists of the gallery’s recent 16th “Solo Art Series” Art Competition. Victoria will now have a month-long solo art exhibition, be featured on the gallery’s front page, in the Gallery’s YouTube Channel, as well as in the “Solo Art Series” archive.

Victoria is an award-winning artist based in Sydney, Australia. She will now be promoted by the gallery with an extensive public relations campaign.

In addition, as part of her award package, Victoria will now be featured as a Light Space & Time – Artwork Archive promoted artist.

Victoria’s art will also be featured on the gallery’s YouTube Channel and with an event postcard.

The “Solo Art Series” is a series of monthly solo art exhibitions for established artists who have a body of work to present to the public.  Artist participants were asked to submit the following 3 components for the “Solo Art Series” competition: 1. Their art.  2. Their artist biography.  3.  Their artist statement.  These elements were evaluated and judged, which resulted in the selection of the artists who will be featured in individual month-long solo art exhibitions.  This was the 16th “Solo Art Series” Art Competition that the gallery has conducted.

Below are Victoria’s Artist Biography, her Artist Statement, along with 15 or her paintings.  We hope that you will take the time to read Victoria’s information and to take a look at her art.

Victoria Kitanov is an Australian Sydney-based artist & sculptor with a love of lifelong learning, a passion for portraiture, and a fascination with Australia’s maritime heritage. Her first marine paintings, The Boatman: Portrait of Gary Richardson (2016) and The Master Modeller: Portrait of David Glasson (2017) were inspired during this period. Both paintings debuted as part of the Naval Heritage Collection at the 2017 My State Australian Wooden Boat Festival in Hobart, Tasmania. These artworks reappeared at the 2019 My State Australian Wooden Boat Festival, along with a selection of Victoria’s marine paintings which were carefully selected to compliment the display of built-to-scale boat replicas crafted by the ‘master modeller’ himself – David Glasson.

Victoria’s creative career commenced in commercial art & graphic design before moving into the publishing world as a children’s book illustrator in the early 1980s. During this period, Victoria was regularly invited to talk about illustration and entertain hundreds of schoolchildren for Children’s Book Week and other literary events. From 1990–97 Victoria was nominated as the approved re-illustrator of May Gibbs classic gumnut babies for Angus & Robertson Publishers, and during this period illustrated several books, including Ten Little Gumnuts, A Gumnuts Year, and a series of 6 smaller format books written in the classic Gibbs’ style.

By the late 1990s, Victoria left her career in illustration to continue tertiary studies in History with Honours at The University of Sydney, followed by a career as a Library and Information professional, and later the Australian Public Service in Canberra. From 2007-2016 Victoria was employed as Information Manager and Library Officer for Sea Power Centre – Australia, and from 2016-2019, provided archival skills with the Royal Australian Navy’s Heritage Collection in Sydney. However, the call to take the plunge was strong and Victoria launched her own creative business ENTRÉE TO ARTS PTY LIMITED, which aims to assist adult learners to tap into their innate creativity and wellbeing through the visual arts.

The other wing of Victoria’s business is VICTORIA KITANOV FINE ARTS, which has enabled Victoria to build an impressive portfolio by creating unique and original marine artworks with a focus on Australian maritime heritage and storytelling. Victoria is also an Exhibiting Member of the Australian Society of Marine Artists Incorporated. Artistic Inspiration: “Genre painting that tells a story or inspires one! I am inspired by the work of artists including Joaquin Sorolla, Edgar Degas, Henri Toulouse Lautrec, Anders Zorn, Elizabeth Vigee le Brun, and sculptors including Malvina Hoffman and Auguste Rodin.” Media Choice: I love the beauty and flow of watercolour and the light of pastels, but also work in oils and acrylics on occasion.

Once my nemesis watercolour has become my favourite in which to capture and convey the story I wish to tell. Equally, I adore pastel – occasionally underpainted with watercolour, for its ability to capture light, convey texture, and create atmosphere. Quite by chance and circumstance, I stumbled into the wonderful world of marine art and it is as if I was meant to be there all the time.

All the threads of my life: a fascination with people, with the art of storytelling and oral history, my roots in illustration, a love of lifelong learning, an abiding interest in history, an intrepid curiosity with exploration and travel, and a desire to understand the world around me, draws me to want to reveal and represent the flotsam and jetsam of our maritime heritage.

The workboats, the boat sheds and bridge works, our vanishing maritime industries, model boat makers, sailors, canine mascots, and all the random stories are engaging to me. In other words, of abiding interest is the storytelling aspect told through the medium of visual art, and with this is an urgent desire to honour and capture an impression before it recedes out of sight and into distant memory.