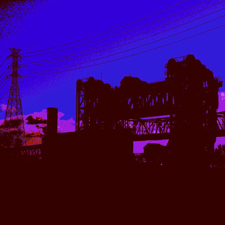 CHICAGO, IL - September 13, 2012 / - Leon Sarantos is honored to have his digital art selected for the 69th Annual Salon Show. The exhibit is sponsored by South Shore Arts at the Center for Visual and Performing Arts in Munster, Indiana. The juror, Daniel Schulman, is with the City of Chicago’s Department of Cultural Affairs, and has over 25 years of curatorial experience at the Museum of Modern Art and the Metropolitan Museum of Modern Art in New York, and at the Art Institute of Chicago. The opening reception is Sunday afternoon, September 16, from 1:00 to 3:00 PM. The exhibit continues until October 28th and is located at 1040 Ridge Road, Munster, Indiana, a half hour’s drive from downtown Chicago.

Leon Sarantos uses digitally transformed photos to present scenes of the bridges over the Calumet River near 95th street in Chicago. Chicago is called the City of Bridges; many bridges were built along the Calumet River since its development in the 1860s. The Calumet harbor continues to be this region’s busiest port. The Chicago Skyway Bridge was built to be a shortcut from State Street in Chicago to the steel mills on the Southeast border with Indiana. Leon sees the notion of transformation as being true of this region on a symbolic level as well being his artistic media. Leon states this about his art, “The vibrant colors in my photos represent the vital role this industrial hub played in developing the Calumet region.” Two of his digital artworks will be on display at the exhibit are titled “Infrastructure Madness” and “Lift Bridges at Dusk, Calumet River”.

South Shore Arts has been improving the quality of life along the South Shore of Lake Michigan for over 70 years by providing art programs to artists and to residents of Indiana and Illinois. It all started in the hat department of Minas Department Store in downtown Hammond, Indiana with an annual exhibit of regional artists, now known as the Salon Show. Today South Shore Arts is a Regional Partner for the Indiana Arts Commission located in the Center for Visual and Performing Arts in Munster, Indiana with two branch locations - Substation No. 9, in Hammond, and the Crown Point Community Art Center in Crown Point, Indiana. For further information about the organization and this event, view their website at http://southshoreartsonline.org

Leon Sarantos originally grew up in the Midwest and currently lives in the Hyde Park neighborhood of Chicago, Illinois. He obtained a Bachelor of Architecture degree in the College of Arts and Architecture at the University of Michigan. After moving to Chicago, Leon continued his work in architecture and art, and studied in at the Art Institute of Chicago and Hyde Park Art Center.

Mr.Sarantos has exhibited his work extensively in solo and group art shows on an international basis. He recently won an Honorable Mention Award in the Figurative Art Exhibition at the Light Space and Time Online Art Gallery. He has received several Special Recognition awards as well and currently his art is included in the current Botanicals Art Exhibition. His website is: http://www.leonsarantosartist.com