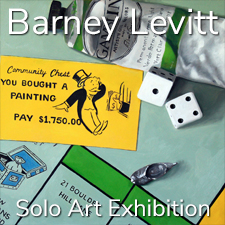 Light Space & Time Online Art Gallery is very pleased to announce that Barney Levitt has been selected as one of the four winning artists of the gallery’s recent 20th “Solo Art Series” Art Competition.  Barney will now have a month-long solo art exhibition and he will be featured on the gallery’s front page, in the Gallery’s YouTube Channel, as well as in the “Solo Art Series” archive.

Barney is an award-winning artist based in Massachusetts, USA. He will now be promoted by the gallery with an extensive public relations campaign.

In addition, as part of his award package, Barney will now be featured as a Light Space & Time – Artwork Archive promoted artist.

Barney’s art will also be featured on the gallery’s YouTube Channel and with an event postcard.

The “Solo Art Series” is a series of monthly solo art exhibitions for established artists who have a body of work to present to the public.  Artist participants were asked to submit the following 3 components for the “Solo Art Series” competition: 1. Their art.  2. Their artist biography.  3.  Their artist statement.  These elements were evaluated and judged, which resulted in the selection of the artists who will be featured in individual month-long solo art exhibitions.  This was the 20th “Solo Art Series” Art Competition that the gallery has conducted.

Below are Barney’s Artist Biography, his Artist Statement, along with 25 of his oil paintings.  We hope that you will take the time to read Barney’s information and to take a look at his artwork.

Barney Levitt has been creating ‘pictures’ ever since he was old enough to grip a crayon and scribble on his parents’ living room walls. He was given his first oil set when he was 10 years old, which set him on his destined path to becoming a professional artist. After graduating with a Bachelor of Fine Arts degree in painting from S.U.N.Y at Oswego, he never looked back.

He was greatly influenced by the works of the Dutch and Flemish masters and his highly detailed works in realism captures the viewers’ attention, for their unique and often humorous content. Humor and a strong narrative are key ingredients in his work, and he often uses a bright color palette in his paintings. His work ranges from classical still life set-ups to quirkier narrative pieces that invite the viewer to create a narrative of their own.

Titles are important to Barney as they give the viewer better insight into what he’s trying to convey. His work combines naturalistic detail with quirky offbeat compositions that often juxtapose ordinary objects in ways the viewer doesn’t expect.

Barney is a signature member of The National Oil and Acrylic Painters’ Society (NOAPS), A Copley Society of Art Master, a member of The International Guild of Realism (IGOR), and Oil Painters of America (OPA). He is represented by several New England galleries.

The goal of my work is to capture the viewers' attention through humor and narrative. My work is highly detailed realism but often with an interesting twist which I hope will elicit a smile, or invite wonder and offer a narrative to spark the viewers' imagination. My subject matter incorporates natural objects like bird and wildlife, to beach stones, feathers, and other found objects. I look for material that evokes a sense of nostalgia; classic board games and antiques. My paintings are created layer by layer, as the details build slowly with each successive layer. I have a keen eye for detail and no detail is left undone in my work. Painting is my way of expressing my unique view of the world and my compositions often border on the surreal. The scenes often can't exist in reality, but the photographic detail would tell you otherwise. 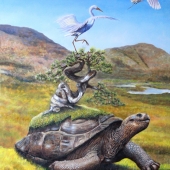 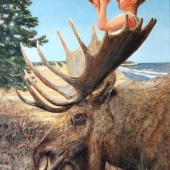 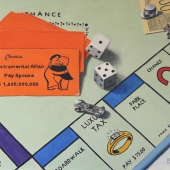 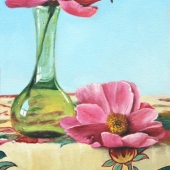 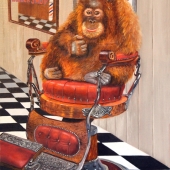 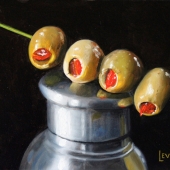 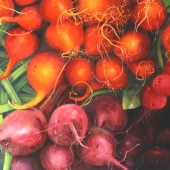 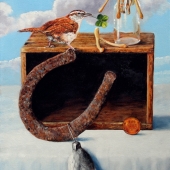 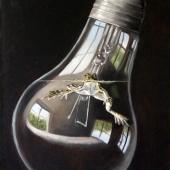 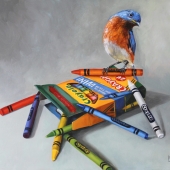