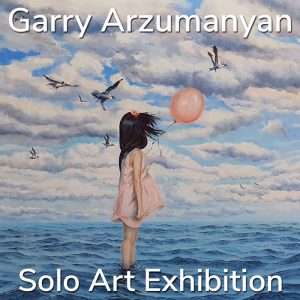 Light Space & Time Online Art Gallery is very pleased to announce that Garry Arzumanyan has been selected as one of the four winning artists of the gallery’s recent 22nd “Solo Art Series” Art Competition.  Garry will now have a month-long solo art exhibition and he will be featured on the gallery’s front page, in the Gallery’s YouTube Channel, as well as in the “Solo Art Series” Archives.

Garry Arzumanyan is an internationally acclaimed, award-winning, self-taught artists based in Armenia. He will now be promoted by the gallery with an extensive public relations campaign.

In addition, as part of his award package, Garry will also be featured on the gallery’s YouTube Channel and with an event postcard.

The “Solo Art Series” is a series of monthly solo art exhibitions for established artists who have a body of work to present to the public.  Artist participants were asked to submit the following 3 components for the “Solo Art Series” competition: 1. Their art.  2. Their artist biography.  3.  Their artist statement.  These elements were evaluated and judged, which resulted in the selection of the artists who will be featured in individual month-long solo art exhibitions.  This was the 22nd “Solo Art Series” Art Competition that the gallery has conducted.

Below are Garry’s Artist Biography, his Artist Statement, along with 20 artworks.  We hope that you will take the time to read Garry’s information and to take a look at his beautiful oil paintings.

Garry Arzumanyan is an award-winning self-taught artist whose paintings have been exhibited in Netherlands, the United States, Australia, Slovenia, France, Italy, Russia, Serbia, Belarus, and Armenia. He describes his art as being born by both women and the sea, stating that he has not yet encountered "a deeper, more enigmatic, nor more fatal phenomena".

Each painting is a separate story, through which he tells the audience about something worrying him and trying to explain his point of view. Every painting is a dialogue with the audience which may last from a few minutes to lifetime. Garry loves to discover people`s emotions, fears, dark and light sides in this dialogue. His expressive compositions are created with oils, pencils, and charcoal on canvas or paper.

Born in Armenia and from early childhood inspired by the works of Ivan Aivazovsky and Francis Bacon, he became a multiple winner of various competitions since childhood.

When I start my paintings, the first thing I do is outlining complexity and harmony of the sky and clouds, and when the sky is fully done, I get to the two layers of the sea and before finishing the sea, I start painting figures over the sea. Drawing figures over the water is the main and the most time-consuming process of my painting, and it may sometimes last months. I usually start with 2 or 3 figures, but with the time this number can get more, at times with unexpected images for myself. Each painting is a separate story, through which I tell the audience about something worrying me and trying to explain my point of view describing the duality of human feelings through the prism of existential perception. Every painting is a dialogue with the audience which may last from a few minutes to lifetime. I love to discover people`s emotions, fears, dark and light sides in the dialogue. Many people say that I paint a sea, but I do not paint a sea. I paint people, through water and sea images. I paint people with their weak and strong, dark and light sides, people with their fears, people with their dreams. 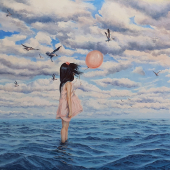 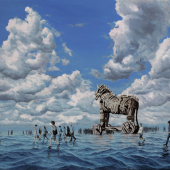 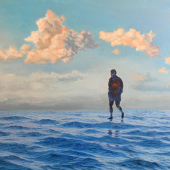 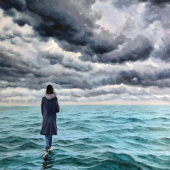 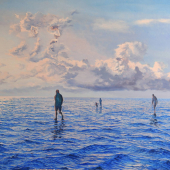 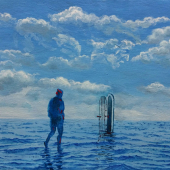 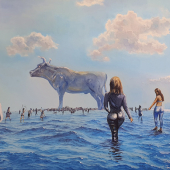 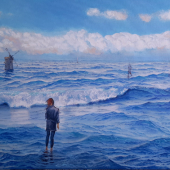 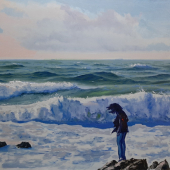 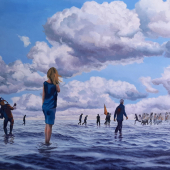 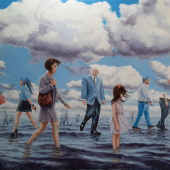 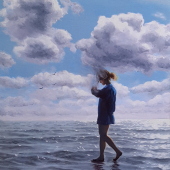 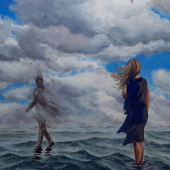 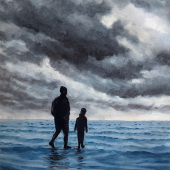 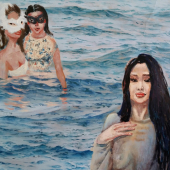 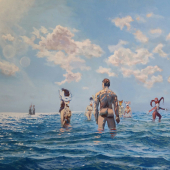 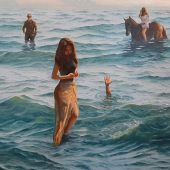 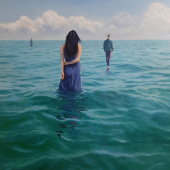 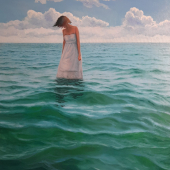 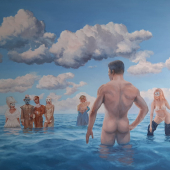