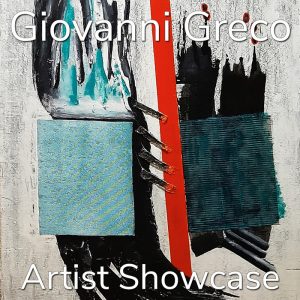 Light Space & Time Online Art Gallery is extremely pleased to announce that Giovanni Greco has been named as the Gallery’s new featured artist and he will now be promoted by the gallery for the next 14 days in the gallery’s Artist Showcase.

Giovanni is an award-winning artist based in Italy. Giovanni was selected as 1 of the top twelve finalists in the gallery’s 23rd Solo Art Exhibition Series. The placement in this competition qualified his art to be showcased in this feature.

Giovanni’s Artist Showcase feature will be promoted to over 350+ major news outlets, with inclusion on Google News & Bing News. In addition, the gallery will also be featuring and promoting his artwork in the gallery’s various social media networks for further exposure.

Below are Giovanni’s Artist Biography, Artist Statement and 5 artworks that were submitted to this competition.

Born in Catania (Sicily) where he lived for many years and where he completed his artistic studies at The Naked School in Catania at the BB. AA academy and at the beginning of the 90s he began his pictorial activity. In those years he worked as a collaborator in galleries, cultural associations that allowed him to enter the most stimulating environments to be able to deepen his desire for further knowledge of the history of art, encouraging him and enriching him with that culture that encouraged him to undertake the artistic activity.

Along the way, the artist, who initially devoted himself to the figurative, has often felt the need to confront various masters of contemporary art in order to arrive at the synthesis of a more immediate reality where gesture, shape, color and the line let the emotional contents determine passions, tensions and discomforts thanks also to the partnership with the informal abstract artists of his hometown.

The works of Giuseppe De Gregorio, Manlio Bacosi, Emilio Vedova have revolutionized the way we see him, what he says to himself and how much he feels.

He currently lives and works between Catania and Rome.

In my works I try to make you feel a human vibration that enhances feelings through shape, line, color and intentionality; the encounter with the unexpected, for the opening of new worlds and new possibilities of vision where the work itself is understood as a result of the encounter between man and nature in an alternation of empathy between pure form and its complexity. Strongly attracted by the material relationships that the eye is able to grasp in the surfaces of objects, along the walls of the city or even more in the memory of the already state.

I am intent on developing a discourse on structurality, and particularly on the technique in which color is assumed in its linguistic value. This also applies to signs, which are admitted to constitute an alphabet without a code that guarantees a form that reflects an idea or trace and document an emotion. And so in the color they are inserted into the layout, into the diagram of tensions, of the rapidity, of the cadence which the gesture encounters as it explores the interior space and the surface to be painted. In search of a point of access or contact. 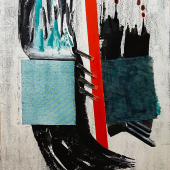 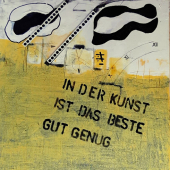 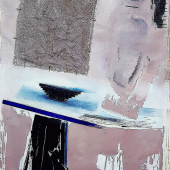 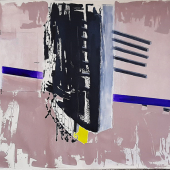 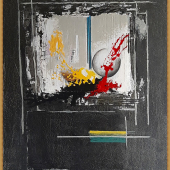