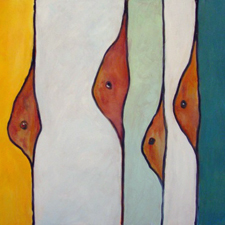 CHICAGO, IL - March 3, 2013 / - Leon Sarantos is very pleased to announce that three of his “Organic Creatures” paintings were selected for the “Mad World”, National Juried Exhibit at Union Street Gallery in Chicago Heights, Illinois. The opening reception will be on Friday, March 8, 2013 from 6:00PM to 9:00PM Mr. Sarantos is among 34 out of 110 artists selected for this exhibit. Natalie Domchenko, Director of the Peter Miller Gallery, Chicago was the juror.

The Mad World exhibit will feature art that is absurd, surreal, and simply MAD! Mad World will display art by artists from 11 different states. Some of the art on exhibit depicts bizarre or imagined worlds, crazy structures not bound by the laws of the gravity, whimsical inventions, and strangely absurd scenarios that appear to be straight out of fantasy or science fiction!

Mr. Sarantos’ “Organic Creatures” paintings combine a feeling of whimsy with a sense of bizarre absurdity. One of the artworks titled “Organic Creatures Going to The Beach,” Sarantos says he “actually envisioned it in an instant behind my eyelids as I was rubbing my eyes after some tiring work. I tried to apply the image to canvas immediately, adding all kinds of color and quick composition, while keeping the main figures true to my vision. When finished, I looked at the painting and felt that here were some strange creatures doing something, and sensed that they were on their way to the beach.”

He then created more oils of this same family of creatures moving about in different settings. His other paintings for this exhibit include “Organic Creatures Slurping Up a Mango Smoothie” and “Organic Creatures Taking The White House Tour.”

The “Mad World” exhibit will be on display from March 6, to April 6, 2013 with the opening reception on Friday, March 8, 2013 from 6:00PM to 9:00 PM. The opening reception is free and open to the public. Patrons will enjoy complimentary wine and food while they explore this strange and beautiful exhibit. The Union Street Gallery is located at 1527 Otto Boulevard, Chicago Heights, IL 60411. More about Union Street Gallery visit their website www.unionstreetgallery.org or further information at 708-754-2601.

Leon Sarantos originally grew up in the Midwest and currently lives in the Hyde Park neighborhood of Chicago, Illinois. He obtained a Bachelor of Architecture degree in the College of Arts and Architecture at the University of Michigan. After moving to Chicago, Leon continued his work in architecture and art. He studied at the Art Institute of Chicago and Hyde Park Art Center.

Mr. Sarantos has exhibited his work extensively in curated art shows on a national and international basis. He is a member of Artsia: The Society of International Artists, 119th Street Artists and Studio 659. He is represented by Paul Henry’s Art Gallery, Indiana; CornerStone Art Gallery, Indiana; and the Xanadu Gallery, Arizona. His website is http://www.leonsarantosartist.com