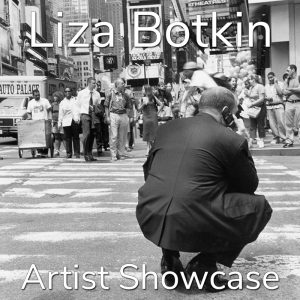 Light Space & Time Online Art Gallery is extremely pleased to announce that Liza Botkin has been named as the Gallery’s new featured artist and she will now be promoted by the gallery for the next 14 days in the gallery’s Artist Showcase.

Liza award-winning photographer based in Los Angeles, CA, USA. Liza was selected as 1 of the top twelve finalists in the gallery’s 22nd Solo Art Exhibition Series. The placement in this competition qualified her art to be showcased in this feature.

Liza’s Artist Showcase feature will be promoted to over 350+ major news outlets, with inclusion on Google News & Bing News. In addition, the gallery will also be featuring and promoting her artwork in the gallery’s various social media networks for further exposure.

Below are Liza’s Artist Biography, Artist Statement and 5 images that were submitted to this competition.

Liza Botkin was born and raised in New York City. She graduated from The Brearley School and attended Syracuse University and Hunter College. In 1971, Liza moved to Los Angeles where she worked 9 to 5, mostly in the entertainment industry.

After working as a studio manager for Michael Childers, she purchased a Leica CL camera, took a photography course at Fairfax High School and her photography career began.

During the 70s and early 80s she roamed the streets, department stores, markets and public gatherings of L.A. She entered competitions and was chosen to be in several publications and shows. In 1983, she stopped shooting, got married and her Leica sat in a drawer for the next 15 years. In early 1998, at her husband's urging, she brought the Leica out of the drawer, built a darkroom, and she’s been shooting and printing ever since.

Liza still hangs out in malls, markets and places where large groups of people tend to gather. She takes her camera with her every day, shooting "from the hip" because she doesn’t want people to be aware of her. She takes pictures where the subjects are weirdly but humorously interacting, in moments that amuse her and makes her smile when they come up in the developer.

I was born and raised in New York City, but my photographic career began in Los Angeles in the 70s while I was working for photographers Michael Childers and Lou Stoumen, from whom I learned how to print.

I consider myself a street photographer, shooting from the hip, taking my camera with me wherever I go. I wander the streets of Los Angeles, spending much of my time in malls where, for many years, I’ve been documenting the preoccupation many people have with shopping.

Though I’ve never studied the art of photography in an academic setting, my work is deeply influenced and defined by that of Henri Cartier-Bresson. I, too, search for what he so aptly called “the decisive moment.” 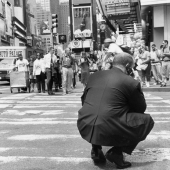 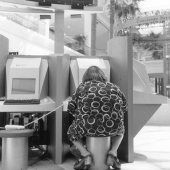 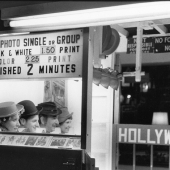 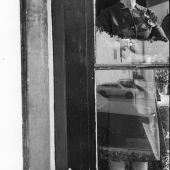 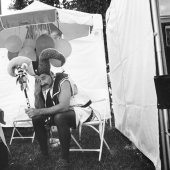