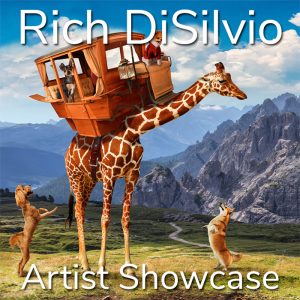 Light Space & Time Online Art Gallery is extremely pleased to announce that Rich DiSilvio has been named as the Gallery’s new featured artist and he will now be promoted by the gallery for the next 14 days in the gallery’s Artist Showcase.

Rich is an award-winning artist based in Long Island, New York. Rich was selected as 1 of the top twelve finalists in the gallery’s 22nd Solo Art Exhibition Series. The placement in this competition qualified his art to be showcased in this feature.

Rich’s Artist Showcase feature will be promoted to over 350+ major news outlets, with inclusion on Google News & Bing News. In addition, the gallery will also be featuring and promoting his artwork in the gallery’s various social media networks for further exposure.

Below are Rich’s Artist Biography, Artist Statement and 5 images that were submitted to this competition.

Rich DiSilvio was born in NY and lives on Long Island. He studied art in college and at the Traditional Academy of Painting, under a protégé of Norman Rockwell.

With a solid foundation in realism, DiSilvio ventured into surrealism, fantasy, and sci-fi art, being inspired by such artists as Salvador Dali, Frank Frazetta and Roger Dean. DiSilvio’s goals as he states “is to focus on the one ability that humans have that no other earthly creature shares, namely the imagination.” He works in oils and acrylics, with an emphasis on digital and photo-manipulation in recent years.

Rich’s art and new media work in the music and entertainment industries earned him an international presence, having worked on projects for Pink Floyd, Yes, Moody Blues, Alice Cooper and on various films. Additionally, as an award-winning author, DiSilvio has written about famous artists in fiction and non-fiction, with his "Arnolfini Art Mysteries" series being perhaps the most notable.

Meanwhile his award-winning fine art has appeared in galleries across the USA, from New York to California. His works appear in private and corporate collections, in the 9-11 Memorial Museum and Italian-American museum in NYC, while his painting of the famous composer Peter Tchaikovsky resides at the Tchaikovsky Estate Museum in Votkinsk, Russia.

The Animal Series is based primarily on two premises, namely that our fellow inhabitants have always enamored humans, be they domesticated and friendly or wild predators. As such, they make appealing subject matter.

And second is that the human species differs from the animal kingdom in its ability to create what does not exist, as the imagination is not something our fellow creatures share. Thus, this series celebrates those combined aspects, to be either whimsical or provocative. 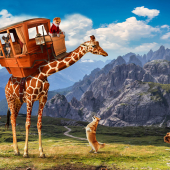 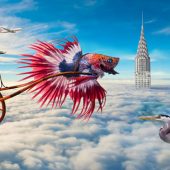 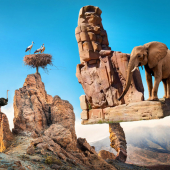 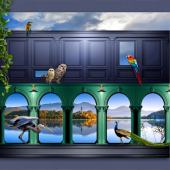 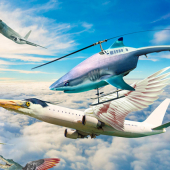