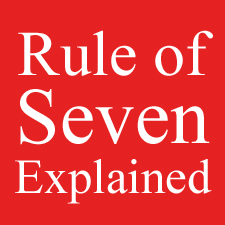 Today, I see many artists who want more exposure for their art and in order to achieve more sales of their art. In order to meet this goal, artists will begin to promote their artwork with a marketing program. When that marketing does not produce the results that were hoped for, the artist becomes discouraged and gives up their marketing efforts. The Rule of Seven may help to explain why an artist’s marketing effort does not create the results that were envisioned.

The Rule of Seven is a depression era advertising and marketing maxim developed by the movie industry. The studio bosses discovered that there was a certain amount of advertising and promotion required to get someone to see one of their movies. Over time, the movie studios realized that it took at least seven messages to get someone to buy a movie ticket. Thus, the Rule of Seven was developed which stated that a prospect needs to hear the advertiser’s message at least 7 times before they will take action to buy that product or service.

There is even another rule based on a study made by Thomas Smith in 1885 that stated that an advertising message must be heard at least 20 times before someone will buy! I am not sure about that, but the point of all of these rules is that advertising, marketing, and promotion must be done on an ongoing and consistent basis in order for the advertiser to see any effective results. Marketing is a process that takes consistency, effort and time in order for it to be efficient, to work well and to see any discernible results. Too many artists try to market their artwork but easily give up the process when they do not see immediate results.

How can an artist effectively adhere to the Rule of Seven when promoting their artwork or art business? In order to be effective, an artist should utilize an integrated marketing campaign which will reach its intended target. The artist must first identify and study their target audience. With the artist’s target market identified, selecting the media which will best reach the target is the next most important task for the artist to make. The marketing campaign may include advertising, email marketing, social media, public relations, article marketing, internet exposure, and blogs.

Whichever is the most effective media (or combination of media) for the artist to use in reaching their intended target will become the basis for communicating their message. To recap, there are three important components to effectively using the Rule of Seven:

1.  Identifying and studying the target audience.

2.  Determining the most effective media in reaching the target.

3.  Delivering that message at least seven times to the target.

As with all rules and maxims, there are usually exceptions to the rules. I am sure that there are exceptions to the Rule of Seven as well. Overall, an artist can see from this rule that they just cannot send out a few “messages” and hope to have a successful marketing program to sell their art. The “message” needs to be delivered on target, effectively and consistently over a period of time in order for the artist to achieve success.